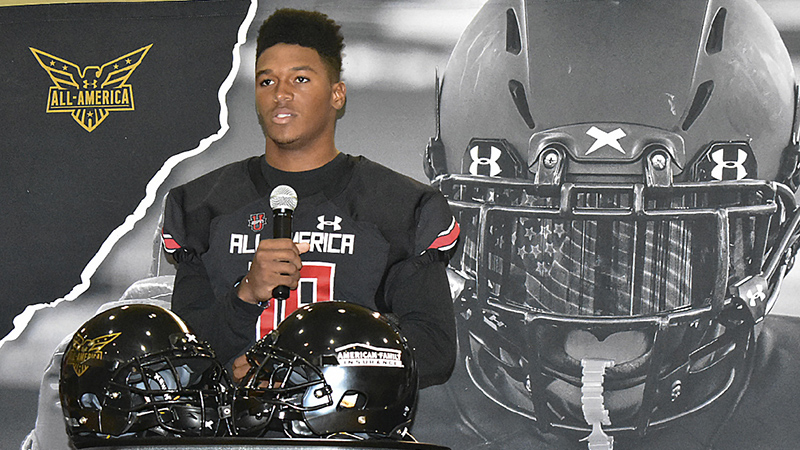 When Roschon Johnson was in the seventh grade, according to a 2016 article in The News, he typed a document that spelled out his goals for the future: Praise and worship God, be the best student possible and become Port Neches-Groves High School’s starting quarterback.

Greatness in the sports world is often measured in statistics, but Johnson’s greatness as a student-athlete and a person go beyond numbers and even awards.

Just as an example: Last December, Johnson was among a number of PNG seniors who coached students with special needs in a Special Olympics-sponsored flag football game with Little Cypress-Mauriceville.

“It really touches me,” he told The News then. “Just to have an impact on these kids, to give them an experience I kind of had. It’s real special to be out here with them, and you can tell by the smiles on their faces and how they approach it.”

Shortly after the semester ended, Johnson graduated with a 4.0 grade-point average and enrolled early at Texas. Johnson had been injured at times during his senior season, but “senioritis” never appeared on the injury list.

What pride locals must have felt knowing the young man who dominated countless PNG football games and willed the Indians to victory finally reached his goal of becoming a Longhorn — and ahead of schedule.

Neither does the way Johnson approached every game as a three-year PNG starting quarterback and would-be Under Armour All-American, nor that act of service in December, fully encapsulate his greatness. It’s his commitment to excellence from the time he wrote his goals down that allowed him — and the PNG Indians — to be successful.

The committee behind the Franklin D. Watkins Award, presented to the top African American male high school scholar athlete in the country, took notice of Johnson’s on- and off-field accomplishments and named him a finalist.

As spring camp in Austin progressed, Johnson saw his name move up the depth chart at quarterback. An injury to classmate Jordan Whittington necessitated Johnson’s move to second-string running back, and it has paid off.

Mid- and South County has seen a local make a freshman impact at Texas before. Jamaal Charles of Port Arthur helped the Longhorns win the 2005 national championship.

Johnson’s impact is a result of being selfless and helping wherever needed because he can and he wants to. The experience of rushing for nearly 5,000 yards in high school has served him well … along with setting goals and making the grade.

I.C. Murrell is sports editor of The News. He can be reached at ic.murrell@panews.com.