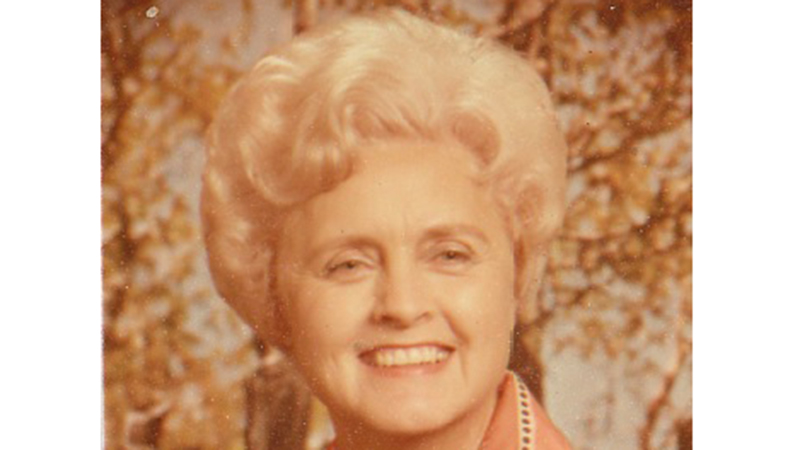 She lived her childhood years on her grandfather’s farm in Okemah.

Her teenage years were in Bartlesville, OK, and Jennie graduated from Bartlesville High School in 1938.

Jennie and Harold lived the first 18 years of their marriage in Port Arthur, TX.

Jennie was a stay-at-home Mom while they raised their daughter, Donna Gail, in Port Arthur until she graduated from high school. During those years, the family was faithful members of The Methodist Temple in downtown Port Arthur.

Jennie was also active in Camp Fire Girls, PTA, the Port Arthur garden club, bridge club, and she and Harold always looked forward to their monthly dance party with the “Revelers” dance club.

During that time, Harold was working for Mrs.Tucker’s/Anderson Clayton Foods, and in the summer of 1965 the company transferred the family to San Jose, CA.  Daughter, Donna Gail, returned to Ft. Worth, TX and was a student at Texas Christian University.

Harold and Jennie loved California and all it had to offer in wonderful climate, food, recreation and a beautiful year-round flower garden surrounding their home.

They made new friends easily, and Jennie flourished by becoming a volunteer for the Santa Clara County American Red Cross.

She enjoyed the Red Cross experience so much, that she eventually secured the staff position of Director of Volunteers.

The job required traveling throughout Santa Clara County, training volunteers and Jennie always had many fond memories of these Red Cross adventures.

Although Jennie was sad to leave her home, friends and job in San Jose, she looked forward to being in Oklahoma again and close to her aging relatives.

They made a comfortable home for themselves in OKC and soon joined the Church of the Servant United Methodist Church.

Harold and Jennie both became volunteers in the Church and made many good friends there.

They always made time for fun traveling to Daytona Beach with Harold’s Texarkana school friends.

And annual reunions of the WWII 351st Bomb Group were never missed.

They spent the remainder of their lives in Oklahoma City.

We are thankful and most appreciative for the dedicated and compassionate caregivers at The Lakes Care Center during these last years of Jennie’s life.

And, to Crossroads Hospice & Palliative Care who provided her comforting attention and care at the end stages of life.

Jennie is predeceased by her husband, Harold.

She is survived by her daughter, Donna Gail Laski who lives in Dallas, TX.

In lieu of flowers, a charitable gift in Jennie’s name to your local American Red Cross will be greatly appreciated, or to the Church of the Servant in Oklahoma City (14343 North MacArthur Blvd, Oklahoma City, 73142).