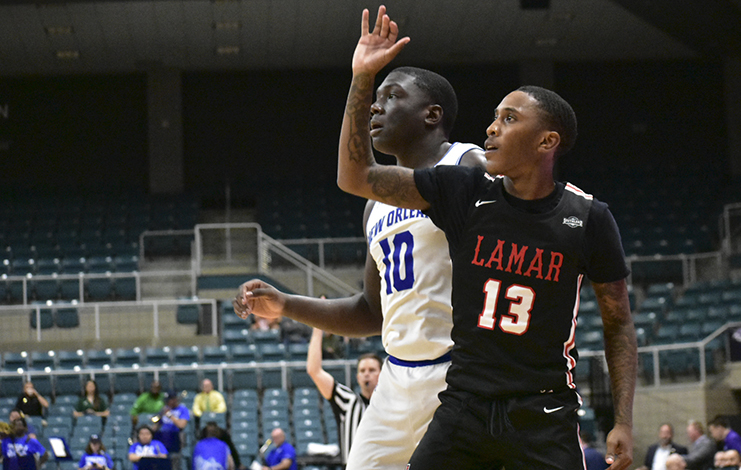 BEAUMONT — Stepping on the court for the first time in the 2019-20 season, a solid mix of veterans and newcomers hit the hardwood Thursday afternoon at the Montagne Center for the first official practice of the Lamar men’s basketball team. Just 40 days remain until the season opens against Champion Christian College on Nov. 5.

“There is always a great deal of excitement that surrounds the start of a new season,” said LU head coach Tic Price. “It feels like we just finished the 2018-19 season and here we are opening a new year. I think fans are going to enjoy watching this team play because we have some great returners like V.J. Holmes, Davion Buster, and T.J. Atwood, and some exciting new players as well.”

Joining Lamar for this season are student-athletes from all over the world; five of the incoming Cards are from Texas, two are from Chicago, one is from Canada, and the furthest flying Cardinal came from Hong Kong. The additions bring considerable size for the 2019-20 campaign with Corey Nickerson and Dylan Morrison at 6-foot-7, Jordan Wallace and Anthony Cameron each checking in at 6-foot-8 and David Muoka standing even taller than LU Director of Athletics Marco Born at an impressive 6-foot-10.

Atwood returns to the team after a strong junior campaign was cut short by a season-ending injury. He averaged 10.9 points and 5.3 rebounds a game, and 34 steals and 11 blocks in 2018-19. Buster started his freshman campaign a bit slow but finished the season averaging over 16 points game during the Cards’ nine-game win streak.

Big Red is coming off a 20-win season in 2018-19, the third consecutive season for LU with at least 19 wins. That marks the most successful three-year stretch the 1982-83 through 1984-85 seasons. It has been just five years since Price took over a program that had won a total of six games combined in the two seasons prior to his arrival. Price has 58 wins in the past three seasons and 85 since becoming the head coach of LU men’s basketball.

The Cardinals tip off the new season Tuesday, Nov. 5, at home against Champion Christian. The contest against the Tigers and another against the Arlington Baptist Patriots (Nov. 8) will be LU’s tune-up games before a quick one-game trip to Pittsburgh to play at Duquesne (Nov. 12). The Dukes are coming off a 19-13 season and a seventh-place finish out of 14 teams in a tough Atlantic 10 league.

The Cardinals will open the Big Blue Nation (BBN) Showcase at home on Nov. 15 with a game against Mount St. Mary’s before heading on the road for the rest of the BBN Showcase, playing at Utah Valley (Nov. 21), at Kentucky (Nov. 24), and at UAB (Nov. 26). The road trip will continue Nov. 30 with a game at Texas Southern to close out November.

Big Red opens December by playing Rice (Dec. 7) at home for the first time since 2014, and a Dec. 11 matchup with Southern University at New Orleans will close out the non-conference home schedule. The final non-conference game of the year will be at 23-win TCU on Dec. 14. Conference play opens Dec. 18 with Southeastern Louisiana at home before a game at Northwestern State (Dec. 21) closes out 2019.

Tickets for individual games can be purchased by clicking on the links on the 2019-20 men’s basketball schedule page at LamarCardinals.com.