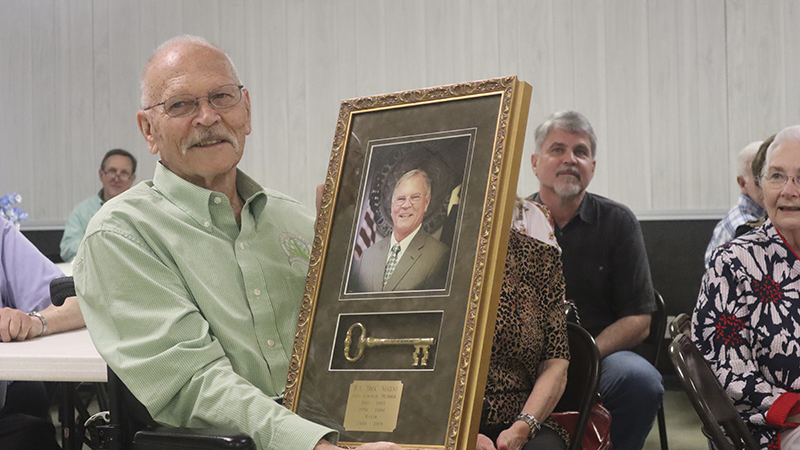 Nederland Mayor R.A. “Dick” Nugent works on his computer during his final weeks in office earlier this year. (File photo)

Family and friends are preparing to lay to rest R. A. “Dick” Nugent, the former mayor of Nederland.

The Louisiana native who made Nederland his home was 84 when he died on Sunday. And while I don’t know the cause of death I do know of his very public battle with cancer. He was a constant sight at council meetings, ribbon cuttings and other functions.

He stood proudly, one leg of his pants pinned/sewed up where he lost a leg to cancer— “I’m not going to let them cut any more off,” he said with a laugh one time when a doctor’s appointment was approaching. He had his crutches with him when he was out and about and appeared to be a very independent man.

Nugent was a graduate of Port Neches-Groves High School and was a U.S. Army veteran. His obituary tells of his 24 years with Texaco Research Lab, how in 1990 he graduated from Lamar University with a Texas Law Enforcement Certification, his time as assistant to the county judge and emergency management coordinator.

Then there’s the 28 years on Nederland City Council and subsequent election to mayor in 2005, which got off to a bumpy start with Hurricane Rita. But Nugent held the reins, likely looking back on his emergency management and military experience, to coordinate the city’s response to the disaster.

Through it all I remember a man with a great sense of humor. I was talking to him on the phone one day some years ago when the cancer was new to him. He recalled, with a chuckle, how he knew something was wrong; he was driving in from the deer lease and his rear became numb. It bothered him enough for him to stop and get out of his vehicle. He laughed while telling the story in a matter-of-fact tone.

Later, in 2007, we spoke about him undergoing chemotherapy for sarcoma, a cancerous tumor, near his hip and thigh. He continued his service to the city through it all.

Nugent could also be stern but not in a disrespectful or mean manner. He did not like it when The Port Arthur News endured circulation changes and he let us know. That didn’t change our professional relationship.

Later, as his illness became worse, he stepped down from his seat as mayor and not long thereafter, he died, but his spirit will continue to live on in the city and community he loved.

Mary Meaux is a reporter for The Port Arthur News. She can be reached at mary.meaux@panews.com