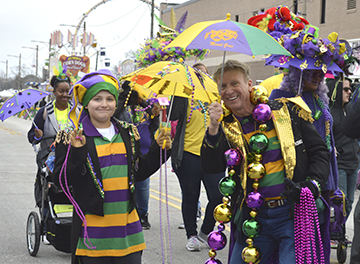 “To my industrial partners, I need you to survive,” Bartie said this week. “So we’re going to need some sponsors. Please don’t take all those sponsorships and go to Beaumont with you. Please don’t do that.”

Bartie, who was elected mayor in June, said he plans to make public next month his plan for a familiar, yet inaugural Mardi Gras celebration.

“Give us about four weeks and we will come to you with what I believe will be a good, sound model for Mardi Gras Port Arthur, Texas,” he said during this week’s Greater Port Arthur Chamber of Commerce breakfast gathering.

In August, Beaumont City Council members voted 6-1, agreeing to a five-year agreement with Mardi Gras of Southeast Texas for a Thursday-through-Sunday downtown Beaumont celebration, starting in 2020.

The effort was previously hosted in downtown Port Arthur.

Tim Romero, chairman of the MGSET board, told The News last month he was thankful for 27 years with Port Arthur as a host. He said it was strictly a financial decision and had nothing to do with the city, itself.

Beaumont Councilwoman Robin Mouton voted against the agreement. A representative from the Councilwoman’s office said Mouton had “no comment” on her vote. A reason for her silence was not provided.

Bartie said the decision to leave Port Arthur took place months before he became mayor; yet the fallout “grieved my heart.”

“The grieving in my heart occurred with the moving of Mardi Gras to a surrounding city,” he said. “Mardi Gras was birthed in Port Arthur and, personally, I think Mardi Gras should stay in Port Arthur. With that in mind we began an exploratory committee to explore opportunities of having a Mardi Gras festival in the city of Port Arthur, where it all began.”

Members of the exploratory committee were said to be surprised by the mayor’s public stance on their efforts, which caught some off guard this week.

Bartie’s comments on Mardi Gras came during an impassioned speech that fell under an overall theme of co-dependence and the need for greater public-private partnerships.

“We know that the investments in our region are great,” Bartie said. “We are proud of that. As the region prospers, so should our city.

Speaking directly to realtors, Bartie asked those “who actually sell real estate in Port Arthur” to “please uplift the city of Port Arthur.”

Without getting into specifics, the new mayor acknowledged there are challenges in Port Arthur that he and others are addressing “in the most feasible and financially sound manner that we possibly can.”