Overturned tanker near Huntsman poses no danger; school traffic will be diverted 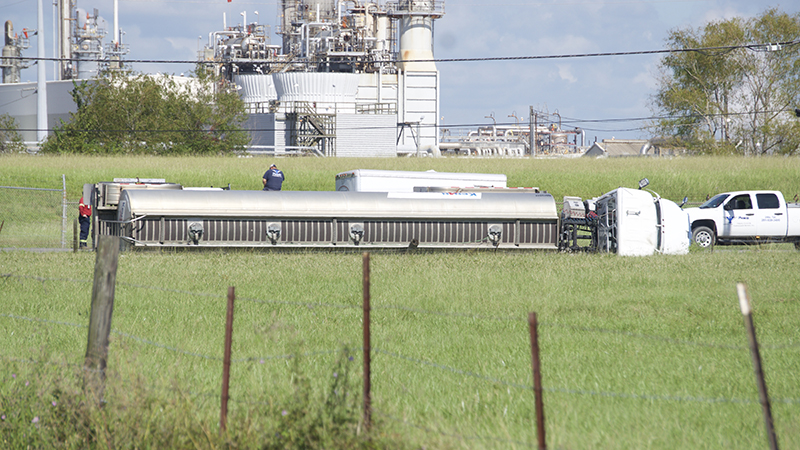 A truck carrying four tanks of biodiesel overturned around 10 a.m. outside the Huntsman Plant in Port Neches on Hogaboom Road.

GROVES — An eighteen-wheeler lies in the ditch near Hogaboom Road. A Groves fire truck flashes its lights, a host of first responders and a gaggle of workers in blue overalls gather around as they assess the damage. If you’re first thought is to panic at the sight — don’t.

A truck overturned near the Huntsman Port Neches Site around 10 a.m. Wednesday leaving the plant, but was thankfully not carrying any hazardous or flammable material. According to a Huntsman official, the tanker was carrying gallons of biodiesel belonging to Renewable Biofuels, a tenant at the Huntsman facility.

“We’ve got a tanker in the ditch,” Groves Fire Chief Dale Jackson said on the scene. “He was leaving the plant out here, got too close to the ditch and overturned the truck. It is a full tanker with biodiesel, which is basically like cooking oil. It’s non-hazardous, no problems with fire or anything like that.”

There were no injuries to the driver or others reported on the road.

Jackson said the incident would be cleared by later this evening, although a specific time was not given.

“We’re waiting for a company to come over and offload the product so they can right the truck back onto the road,” he said. “They have to drill holes into the tank and pump it out. There’s four separate tanks in there and it will take awhile. The reason they do that is because if we try to lift it with that entire product it could compromise the tank and spill. We don’t want that to happen so we have time.”

The road going from the entrance to the plant site, Hogaboom Road near Marion Avenue, to Highway 366 will be closed until further notice.

“We’ve got it blocked off, but the main issue is going to occur around 3 p.m. when everyone is getting out of school,” Jackson said. “We’ve already had school district officials out here to reroute bus traffic. It will be a little bit of an inconvenience but with all the equipment that is going to be out on the road there is no way we can let traffic through.”

Jackson said he wants residents around the area to know that they are not in danger and the roads are expected to be clear by evening time.

“We’re trying to get it contained where it is now and keep any product from coming out,” he said. “That will be a win for everybody.” 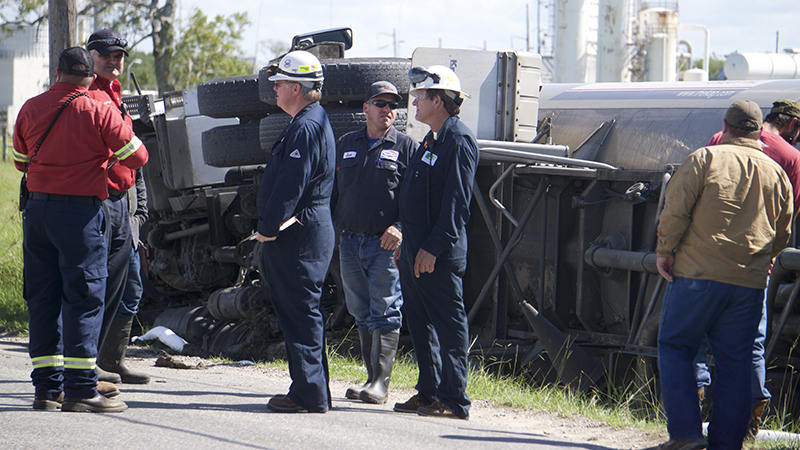 The incident is non-hazardous and is expected to be cleared by this evening, officials said.