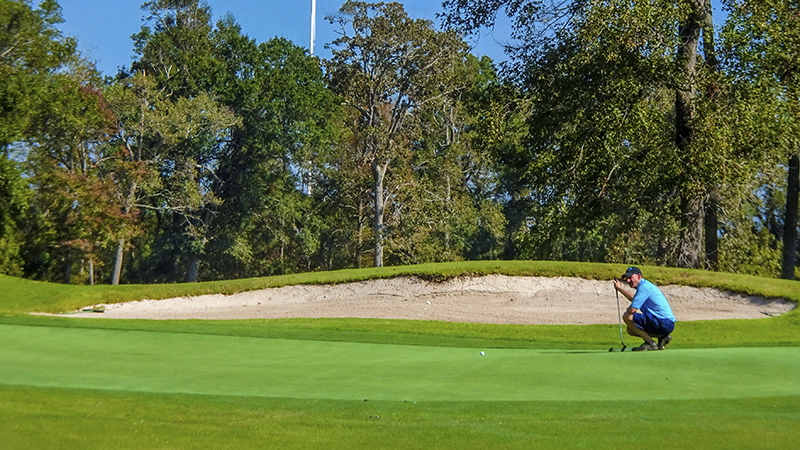 Ron LaSalle of Nederland was probably happier than anybody else that Zaharias was open on Monday. LaSalle took advantage by scoring his second hole-in-one, using a pitching wedge from 122 yards on the seventh hole.

The ace was witnessed by J. Cady, Dan Flood and Rick Pritchett. …

Braden Bailey got off to a solid start Tuesday in the Korn Ferry Tour Stage One qualifier on the Gary Player Course at The Woodlands.

Bailey fired a 4-under-par 68 and is tied for fourth. He needs to finish in the top 23 among 75 players competing in the 72-hole qualifier to advance to Stage Two.

Bailey rolled in five birdies against a lone birdie. The Port Neches-Groves ex made his move with three birdies in a four-hole stretch from 12 through 15. Former Lamar golfer MJ Daffue posted the day’s low round, a seven-under-par 65. Two players shot 67. …

Chris Stroud, who had to skip the first two events to the PGA Tour season because of back issues, plans to play this week at the Safeway Open in Napa, California.

Stroud, in fact, hopes to tee it up in three consecutive tournaments, with Las Vegas up new week. Then comes the “new” Houston Open.
Stroud has been limited in the practice he could put in, so he’s not sure what to expect.

Fellow PNG ex Andrew Landry is also in the Safeway Field. Landry missed the cut in each of the last two weeks. …

Making cuts on the PGA Tour this year, by the way, is going to be tougher than in the past. A new rule that went into force two weeks ago, reduces the cut from the low 70 and ties to the low 65 and ties.

The change quickly made an impact. In the season-opening event at the Greenbrier, 16 players who would have stuck around under the old rule went home early. In last week’s Sanderson Farms Open in Jackson, Mississippi, 12 players fell victim. …

Former Dallas Cowboys QB and current CBS analyst Tony Romo has a sponsor exemption into this week’s Safeway Open. It will be Romo’s fourth time to participate in a PGA Tour event. CBS has signed off on Romo not being available to work alongside Jim Nantz on Sunday’s Bears-Vikings telecast if he makes the cut.

Don’t know if Las Vegas has odds on Romo pulling that off, but it’s pretty safe to say they would be astronomical. He is 0-for-3 at making the cut in previous tourneys and has not come close.

Golden State Warriors sharpshooter Steph Curry was also offered a sponsor exemption, but turned it down. The popular Curry, however, will be playing alongside Phil Mickelson in today’s pro-am. …

From 1983 to 2008, the best/most popular players of a given time, participated in a made for TV even called the “Skins Game.” It put a lot of money in the pockets of Jack Nicklaus, Arnold Palmer, Tom Watson and especially Fred Couples before fading away.

A new version called “The Challenge: Japan Skins” makes it debut on Oct. 20-21 from Chiba, Japan. This version will feature Tiger Woods, Rory McIlroy, Jason Day and Hideki Matsuyama battling for $350,000 in Skins money over 18 holes.

Skins start at $10,000 and escalate in value over the course of the round.

It’s a prelude to the lucrative new PGA Tour stop called the Zozo Championship in Chibo, Japan. The skins competition will air live on the Golf Channel, but unless you are a night owl you may want to tape it. Due to the time difference, play begins at 11 p.m. Central on Sunday, Oct. 20. …