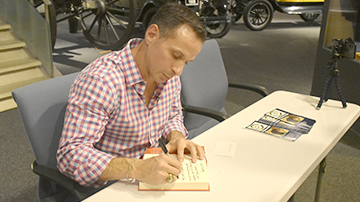 Damon West autographs his first book, The Change Agent, at the Museum of the Gulf Coast, on March 23. (Mary Meaux/The News)

Recent and current college football stars have taken heed to Damon West’s message of being a “coffee bean.”

They both have told reporters about West’s message, which has been spread to countless college football programs, student bodies and other organizations in the past three years:

Not only has West, a former high school and college quarterback from Port Arthur, traveled across the country about changing the environment and making good decisions, he’s also taken his message to national television, appearing on Eternal Word Television Network and the syndicated The 700 Club.

“I never saw it coming,” West said, when he did his first speech at Lamar University three years ago.

On Tuesday, West was in Orlando, Florida, along with author Jon Gordon to tape a segment for Golf Channel’s Morning Drive talk show that will air around 8:15 a.m. Wednesday. The two co-authored The Coffee Bean: A Simple Lesson to Create Positive Change, but met for the first time Monday.

“We go 10 months without knowing each other, and now we’re doing a show together,” West said on a Facebook video Tuesday.

The Morning Drive interview comes on the heels of an announcement West made that his first book, The Change Agent: How a Former College QB Sentenced to Life in Prison Transformed his World, is being shopped around to screenwriters and production companies to be turned into a movie. Although West stresses no deal has been finalized, UCLA coach Chip Kelly verbally suggested actor Mark Wahlberg play West in such a picture.

A video endorsement by Clemson football coach Dabo Swinney three years ago opened up opportunities for West, who now lives in Nederland, to speak to other college programs. West also credits Swinney with helping The Coffee Bean become a Wall Street Journal bestseller.

The Coffee Bean, West said, is centered around one life lesson, unlike The Change Agent.

“The Change Agent is about my life and everybody who made me who I am and God, who has opened doors for me,” West said. “It’s about hope, redemption, God, faith and survival.”

West was released on parole in 2015 after serving seven years of a 65-year prison sentence for his role in Dallas’ “Uptown Burglaries” while dealing with a drug addiction. Today, he has a partnership with the Port Arthur Police Department and Port Arthur ISD to speak in the city’s schools.

“I go all over, but Port Arthur is my home,” West said. “To positively impact the kids in my hometown, it doesn’t get any better than that.”

**This version CORRECTS the year in which West was paroled**