‘It’s just what we do’: Nederland community, officials rallied during storm 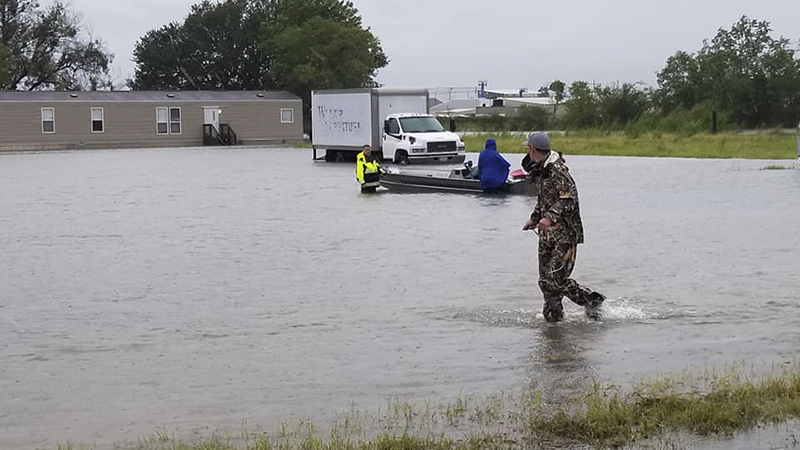 NEDERLAND — Local officials and first responders said the community came together to make the rescue process safer and easier for everyone when Tropical Depression Imelda dropped around 25-35 inches of rain in Southeast Texas over the course of Wednesday night and well into Thursday.

Nederland neighborhoods experienced drenches of rainfall and sustained winds but were able to escape the worst of the storm.

City Manager Chris Duque said the city is assessing the numbers in damage but is glad to have many services restored.

“We’re assessing the damage around town,” he said. “We’re dealing with potential issues with our garbage route today, but we are reopened and running normal operations.”

As of Friday morning, Nederland Fire Chief Terry Morton said he was counting the number of rescues that took place over the previous two days but most came out of the mobile home unit Parkway Village on U.S. 69 and the south end of Beauxart Gardens.

“It was all on a call-by-call basis and when people needed assistance, we helped,” he said. “Some people were rescued by boats, others with fire trucks that were able to get through the high water.”

Morton said performing rescues is part of the job, but help from the community made an already tough task a bit easier.

“The people really appreciated it, we got a lot of compliments,” he said. “It’s part of our job, it’s what we do. First Baptist Church was very instrumental in rescues. They opened their building up and provided some personnel and food for evacuees. It was a huge help for us.”

Henry Brown, the Discipleship Pastor at the First Baptist Church in Nederland said he saw the need for the community to have a place to meet during the storm and it was an easy decision to open the church doors.

“We were very involved in not only the relief efforts in Harvey but the recovery,” he said. “We knew it was important to have a meeting stage for people flooded out of their homes and rescued. We acted upon what we learned from Harvey.”

The church opened its doors around 9 a.m. Thursday and had the last evacuee leave in the early evening. 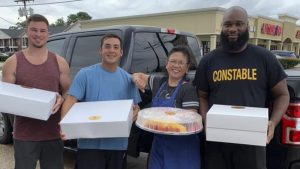 Nederland bakery Golden Croissant worked with first responders Thursday by distributing approximately 200 croissants and 30 dozen cookies, pastries and food trays to those in need around the area impacted by Tropical Depression Imelda. (Courtesy of Golden Croissant) 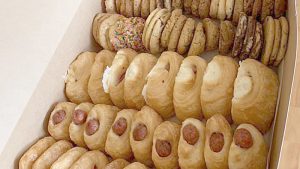 Alongside First Baptist Church, local bakery Golden Croissant aided the first responders by distributing approximately 200 croissants and 30 dozen cookies, pastries and food trays to those in need around the area.

Anita Nguyen, owner of Golden Croissant said they did the same thing when Harvey happened and they felt like it was their duty to help.

“We don’t have a really tall truck or anything, so food is our way of giving back,” she said. “It’s something anyone can enjoy and we wanted to do anything we could do to help.”

Nguyen said the bakery was closed during the storm, but she had friends come and help box up leftovers and bake fresh treats before deciding where the food was needed the most.

“We wanted to try to get to Beaumont but there weren’t safe routes,” she said. “So, we did a post on Facebook on who was able to pick stuff up and give it out. We wanted to go to the shelters but they were getting overwhelmed and told us to wait. The Port Arthur Police Department reached out and said they would give them out and distribute them for us.”

Nguyen said she wanted to do what she could to help out those in need and is happy with having done her part to the best of her ability.

“It’s just what we do,” she said. “We’ve done it twice. We had the food available, why wouldn’t we help? We weren’t flooded, and we felt bad for everyone around us. We like to do our part where we can and food is that way.”