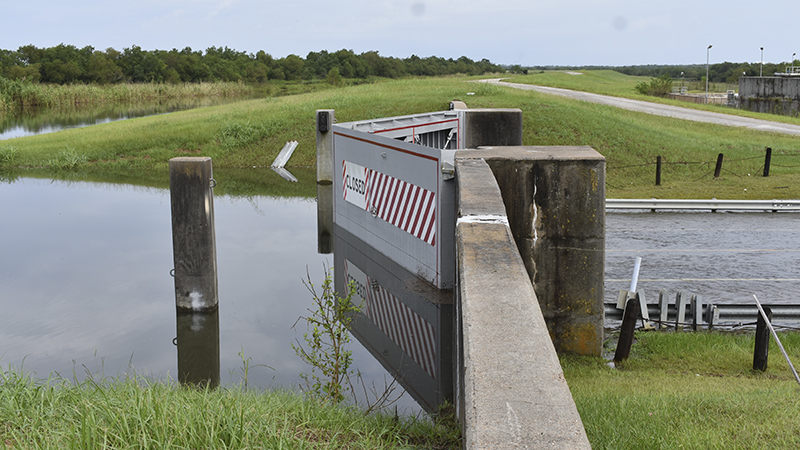 Rumors that the levee protecting the city of Port Arthur failed are false.

Phil Kelley, general manager at Jefferson County Drainage District No 7, said there were no issues with the levee and the flood gates on FM 365 remained closed Friday. Water from Roadair Gully was still about halfway up the gates around noon – the roadway on the gully side was under water, only vegetation and a “no fishing from bridge” sign visible.

Kelley said there is a very large watershed with Rodair Gully and Hillebrandt Bayou running to Taylor Bayou and that most of the water behind the gates is from Beaumont.

“DD6 (drainage District 6) is dong a tremendous amount of work to get water out of Beaumont,” he said.

As soon as the water is down to the seal plate, the gates will reopen, though there is no timeframe for this. The “seal plate” is basically the very bottom of the gate that is even with the surface of the highway.

The gate structure is part of a hurricane levee system and there are several closure structures along the levee, though this is the largest.

Sets of barricades were placed along FM 365 near a trailer park warning of the gate closure but a number of 18-wheelers tried, and failed, to use the road having to turn around in relatively small area.

DD7 is one of the drainage districts in Jefferson County and it covers just over 107 square miles including the cities of Port Arthur, Groves, Nederland, Port Neches and unincorporated areas of the county, according to information from DD7’s website.

Rainfall totals are still being compiled but estimates are that Beaumont saw up to 40 inches of rain.

Mid and South Jefferson County was spared the brunt of the rainfall.

“This (Imelda) was completely overshadowed by Harvey because it was such a big storm,” he said. “The levee system in no way was compromised in Harvey because there was no storm surge. We had a whole lot of rain fall inside that had to get out of here.”