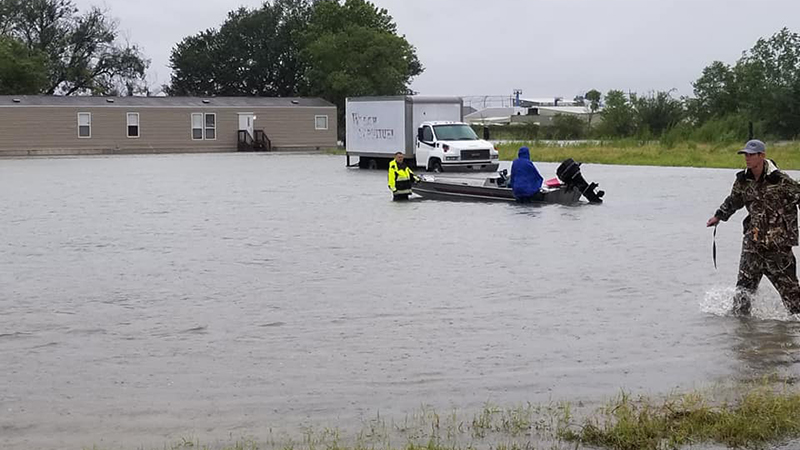 NEDERLAND — The first thing Nederland City Manager Chris Duque said when he picked up the phone at 11:30 a.m. Thursday in the midst of Imelda’s downpour was “it’s wet.”

Duque said Nederland police and fire departments responded to calls all morning and monitored streets that had heavy flooding. For the most part, Nederland was able to avoid evacuations within city limits but have been assisting in areas outside their designation.

“We’ve been evacuating people outside the city limits, but we don’t have a count on how many,” Duque said. “Within the city limits we haven’t had to assist in the evacuations.

“I’ve seen some of the news and I can’t speak to how better or worse we are compared to others — were focused on what’s here. Our responders are doing a good job helping out. It’s just going to be an ongoing process.”

While Nederland seems to be avoiding the worst of the storm, the city streets and ditches still have overflow of water and the city manager encourages residents to stay off the roads if possible,

“We’ve had reports of water getting into some homes in pattern with Hurricane Harvey,” Duque said. “We’ve been working on that. We still have streets holding water. We were in a position where our ditches were in capacity and that’s when the major issues occurred.”

Streets and areas to avoid in Nederland include Avenue A, 21st to 27th street, 36 street to Drainage District 7 as well as Helena Ave. and 14th street.

Duque said he’s hoping for the rain to let up this afternoon long enough for the drainage systems to catch up.

“DD7 is working in keeping the drainage going and fighting the amount of rain that is falling in a short amount of time,” he said.

In the meantime, Duque said he wants to let the community know to stay off the roads and stay safe.

Nederland parks and recreation department, as well as the library are closed till further notice. City Hall has been closed for the remainder of the day and garbage services have been delayed until tomorrow.

The Texas Department of Public Safety (DPS) urges motorists to avoid traveling into Jefferson and Orange Counties due to flooding along Interstate 10 and several other US and FM roads within the two counties.

Many of the feeder roads and city streets have been inundated with flood waters causing the closure of exit and entrance ramps.

DPS is working with the Louisiana State Police (LSP) to stop the westward flow of traffic into Texas with a detour on Interstate 10 at mile marker 12. Once detoured by Louisiana State Police, motorists should not try to enter Texas via SH 87 or SH 12, because those roads are also experiencing flooding.