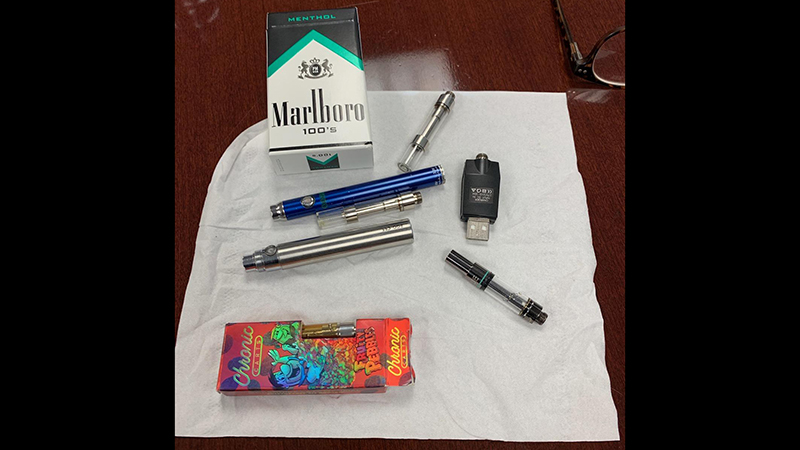 Local school districts are working to educate and do their best to curtail vaping among teens as the state of Texas investigates possible vaping related illnesses.

Vaping, which uses an electronic cigarette vaporizer device, is on the rise in popularity.

Julie Gautier, assistant superintendent at Port Neches-Groves Independent School District, recalls being at a college football game out of town recently, and as she looked out across the fans there was one college student after another vaping.

“It’s the new cigarette of today,” Gauthier said. “It is definitely an epidemic and marketed to reach teens with flavors. And the scary thing today: If you were to have a pack of cigarettes in one hand and a vape in the other and ask a teen if they were the same, they would say no.”

That is part of the appeal; that some people do not think vaping includes tobacco. Some teens see it as a small device that’s cool and has different flavors.

“What’s scary is what we’re seeing in the news now. We’re starting to see deaths. There is no regulation,” she said.

The Texas Department of State Health Services issued a statement earlier this month saying they are “continuing to investigate severe pulmonary illness among people who have reported vaping.” Some cases in Texas have reported vaping products containing nicotine and/or tetrahydrocannabinol, or THC. Similar cases occurred in multiple other states, some resulting in hospitalization.

Port Arthur Memorial High School Principal Glenn Mitchell said finding students with a vaping device is a daily occurrence and something that has increased over the years.

Sometimes students will pay $1 for a “hit” on the device and some devices can hold 1,000 hits. The vaping devices come in many shapes and forms, so teachers must be on alert when students place objects in their mouth — it could look like a pencil or even a flash drive.

Gauthier said they are working to educate students of the dangers. Earlier this year School Resource Officer/Port Neches Police Officer Clint Nichols provided video and training on the effects of vaping as well as the legal ramifications of underage vaping.

PNGISD is also buying two vape detection monitors to be installed at the high school — something Nederland Independent School District is doing as well at their own high school.

“Vaping for high school kids has become an epidemic and Nederland ISD is trying to be proactive,” NISD Assistant Superintendent Stuart Kieschnick said

NISD started seeing a rise in vaping about a year ago, he said, adding that this is something that is easy for kids to do, and it can be hard to detect.

The district brought a group in from Lubbock to talk to students about the dangers of vaping and is looking to bring them back again.

They are also looking to curb usage of vaping devices though punitive measures and educational measures.

If caught with a vaping device in NISD the punishment is the same as if they were in possession of tobacco.

PNGISD has similar punishments to that of tobacco products as well. The first offense is a day of off-campus suspension and warning for District Alternative Education Program. For the second offense the student is sent to the alternative campus.

“This is serious and we definitely take seriously the health of our students,” Gauthier said.

Kieschnick agrees that this is a serious health concern.

“They don’t know what they are getting,” he said. “There are things that could be infused in the vape device and the person inhaling the vapor out of it has no idea what they are putting in their body.”

PAISD is also working to educate students who use vaping devices. Mitchel said they have found that suspension isn’t the right choice for punishment in this instance.

“We look to try and educate, make sure the student is made aware of the incident and what is going on when they are vaping,” Mitchel said.

If found with a vaping device there is a mandatory meeting with the student, parents, health official and a school social worker.

The student must also take part in a study unit on the consequences of vaping.

As for educating the student body, there are advertisements in the school newspaper and notices sent to parents when students are involved in vaping.

Mitchell also sees vaping as an epidemic and dangerous.