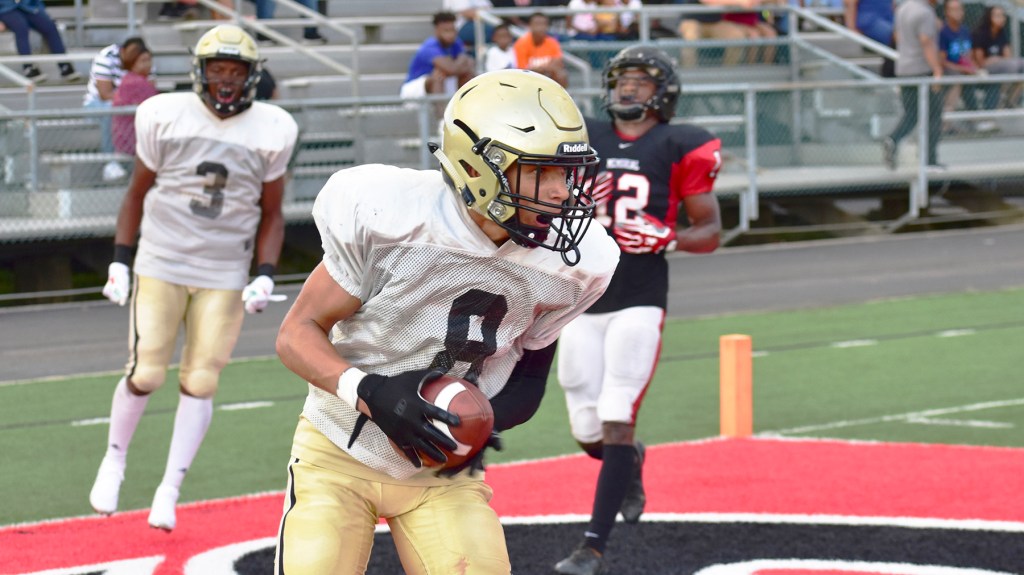 NEDERLAND — Kyndon Fuselier is still learning and growing in Nederland’s offense, by his own testimony.

“I’m still in my first year,” the sophomore slot receiver said. “I’m learning some more stuff. I’m getting the groove of it. I’m pretty comfortable with it, that I can do something special.”

To be clear, this is the first full season Fuselier has played on the Bulldogs’ varsity team. He was called up midway through last season to contribute at safety and running back, and worked out at quarterback during preseason camp, among other positions.

Right now, the slot is his home, and District 12-5A Division II opponents will soon take notice of his big-play ability, if they haven’t already.

“They told me, going into the spring, I was going to play a little ‘Y,’” Fuselier said. The “Y” is an inside receiver, with “X” and “Z” being outside receivers.

“I just started working at it and got better at it,” he added.
The payoff: Fuselier ranks second in the district in receptions with 20 for 303 yards and a touchdown, his longest play from 66 yards out.

“He has things you hope you don’t have to coach a kid on,” Bulldogs head coach Monte Barrow said, using speed and effort as examples. “Mainly, he has an ability to get open and he’s dangerous in the open field.”

Fuselier would be mostly responsible for senior Bryce McMorris throwing for nearly 500 yards through three games, ranking third among 12-5A-II passers. McMorris is 37 for 72 with three touchdowns.

Fuselier wasn’t aware of the district stats, adding he pays no attention to them. One glaring stat the Bulldogs have to face this off-week is being 0-3, their worst start in three years.

“We’re just not playing as a team right now,” he said. “We’ve got a few struggles, like off the field. Soon as we start working as a team and combine together, I think we’ll start hitting a groove.”

Barrow likened any off-field issues and other concerns to matters a family would address together.

“They’ve been tight since the offseason,” he said of the entire team. “The tighter you are, the more you hold people accountable. That’s no different with these guys. At some point, they realize everyone is pulling in the same direction and want the same thing.”

The Bulldogs have the off-week to re-establish any cohesion that helped them post a 10-2 record and a share of the district title with Port Neches-Groves before beginning their defense with a visit to Santa Fe on Sept. 27.

“It’s going to be tough,” Fuselier surmised, “but once we get that first win, I feel like we’ll start getting going.”