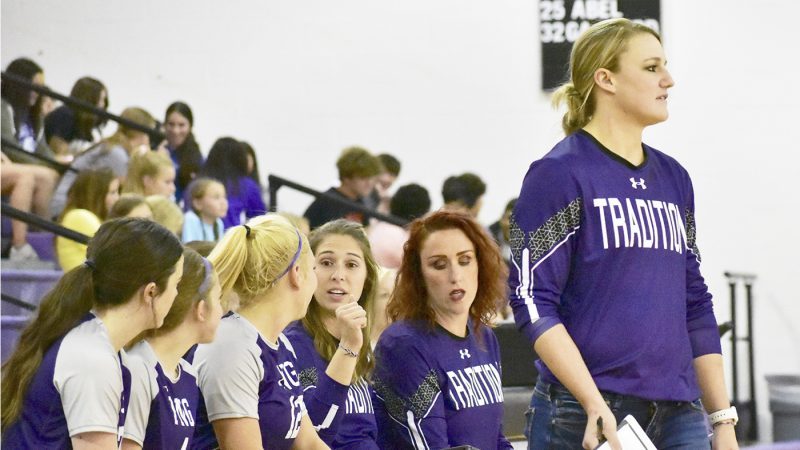 PORT NECHES — They know exactly where their record stands. They also know the adversity they faced.

While their first-year head coach figured some opponents would deal their own version of adversity, the Port Neches-Groves Rock-A-Noos have faced injuries and sickness that just weren’t in the script for the first 26 matches of the season and forced a number of lineup changes.

“A few of our kids have been limited in practices and limited in games with certain injuries,” said Brittany Fruge, dealing with a sinus infection herself Monday.

The injury list is long: Liz Bolyard (both knees), Kassidee Sartin (back), Breeana Riggs (Achilles), Halley Smith (ankle), Reese Weatherford (foot) and Trista Hughes (hips). Be it injury or stiff competition, the Rock-A-Noos (10-16) have had their hurdles with Fruge taking over for Texas’ all-time leader in coaching wins, Barbara Comeaux.

“At first, we were kind of like, ‘Oh, no, this isn’t going to be good,’” Sartin said. “But all the people we have on the team, everybody has the mindset of, wherever you’re at, you can do it, you know? I think we really did good with it, and we’re all getting well now, so it’s starting to come along with everybody.”

The Rock-A-Noos are on a three-match slide and have not played since a loss at Manvel on Sept. 6. They’ve only won two sets during the skid, both in a five-set loss to Texas City.

They’ve also taken on a schedule of elite 5A and 6A teams as well as those who can contend for championships in the private school ranks. Nederland scored a two-set win over PNG, their first since 2016, on Aug. 17 in Dickinson.

“As far as our record goes, I expected it to look like this,” Fruge said. “I even talked to the parents at the parent meeting. I said, ‘You know, you’re going to have to love on your kids a little bit because we are going to play some tough teams in the preseason.’ To me, it’s not even about who wins the preseason. It’s about getting us prepared for district.”

PNG has dropped three best-of-three matches and went to five sets in two more losses. Yet, Fruge and the gang welcome the rigors of the second part of their season — the 12-match slate that is District 21-5A.

The Rock-A-Noos will play three road matches to start district — tonight at Cleveland, Friday at Dayton and next Tuesday at Nederland — before coming home to host Memorial on Sept. 27.

“I think just pushing past the injuries and getting our mindset right, I think everyone’s ready for district,” Bolyard said.

Having graduated all six starters from 2018’s district runner-up team, the Rock-A-Noos feel they have something to prove.

“We’re so excited for district to show everyone what we’ve got,” Bolyard said. “Some people are probably doubting us, but they’re going to be sorry.”

PNG initially dealt with what Fruge termed “growing pains” between her returnees and new varsity players. PNG started the season with sweeps of Bridge City and Houston Lamar before losing six of eight in the Pearland tournament, going four straight without a set victory in one stretch.

Even at 10-16, the Rock-A-Noos are starting to come together, she said.

“Our keyword right now is ‘together,’” Fruge said. “We’re staying in it together. We probably have a lot of people doubting us and overlooking us because of our record, but people don’t realize, it’s not just about your record. It’s about the caliber of teams you’re playing. We’re playing teams like Manvel and Klein Collins and Tarkington and Texas City. We’re playing tough competition, weekly.”