Cards find no answer for Aggies in 62-3 loss 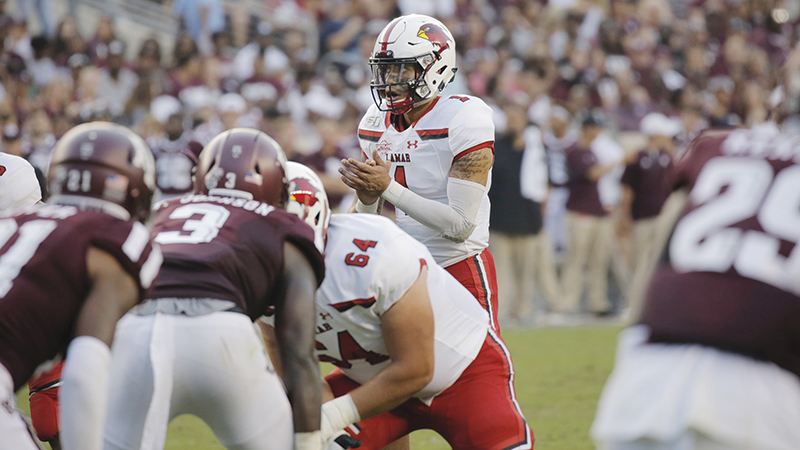 COLLEGE STATION — Lamar entered Saturday’s game at Texas A&M off to its best start since 1985, but the streak came to an end against the nation’s 16th-ranked team. The Aggies jumped out to an early lead and defeated LU, 62-3, from Kyle Field.

Senior Jordan Hoy completed 10 passed for 75 yards, and also carried the ball twice for 6 yards. Junior Myles Wanza led the Cardinals ground attack with eight carries for 53 yards, including a long of 44 which set up a field goal. Senior A.J. Walker added seven carries for 38 yards in his first game back after sitting out the contest against Mississippi Valley State.

Junior Dallas Martin led the Cardinals defensive effort with 11 tackles, including one for a loss. Martin was one of seven Cardinals to record a stop behind the line of scrimmage. Transfer Cameron Hayes recorded an interception as LU forced two turnovers on the night.

“I’m going to tell you what I told the team in the locker room, I’m proud of the effort from this team tonight,” said LU head coach Mike Schultz. “We made some improvements in areas. I know that might be difficult to see in a score like tonight, but they were there. We made very few penalties and cleaned up some other areas. We took some steps forward tonight.

“This is a very difficult place to play. A&M is a nationally ranked program for a reason. This is my first trip to Kyle Field and it absolutely lived up to everything I’ve been told,” added Schultz.

Texas A&M dented the scoreboard first with a 21-yd field goal but the Cards’ defense stiffened inside the 20 to prevent A&M from getting to the goal line. The Cardinals were unable to respond on their opening drive after a Texas A&M penalty kept the drive alive following an LU punt. The Aggies responded by marching the ball 68 yards down the field on seven plays ending with a two-yard touchdown run from Jacob Kibodi. The drive took 3:43 off the clock. Texas A&M closed out the opening quarter with a 31-yard field goal. Despite the score, the Cardinals’ defense held inside the red zone once again forcing A&M to settle for a field goal.

The Cardinals looked primed to respond after an impressive drive deep in Aggie territory. Big Red moved the ball down to the A&M 5 before stalling out forcing the Cardinals to line up for a 23-yard field goal but Bailey Giffen’s attempt was blocked. The block thwarted an impressive nine-play, 70-yard drive. The Aggies closed the half by tacking on two more scores to take a 27-0 lead into the locker room.

The Aggies recorded 312 yards of total offense in the opening half but struggled inside the red zone. LU finished the half with 72 yards, the majority coming through the air.

The Cardinals got the ball to start the second half but A&M forced LU to punt it away. Freshman Enrique Carmona booted a career-long 65 yarder to pin the Aggies back at their own 11. After picking up a first down the Aggies went for the homerun ball but Hayes stepped up to pick off the pass — the Cardinals third pick in as many games. After a short return, Hayes gave the ball back to the LU offense at their own 34. Unfortunately, the Cardinals were unable to turn the miscue into points.

The Aggies responded with a scoring drive on their next possession capped by a 34-yard TD run from Isaiah Spiller. Big Red got the ball back and again moved deep into A&M territory. The drive appeared to come to an end after a Hoy batted pass was called an interception, but after an official review it was determined the ball hit the ground and ruled an incomplete pass. LU sent Giffen out to attempt a 32-yard field goal, and Giffen split the uprights to put the Cardinals on the board. The drive, which was set up by a 44-yard carry from Wanza, was six plays for 61 yards and took nearly two minutes off the clock. Unfortunately, the Cardinals were unable to put any more points on the board.

The Cardinals will to get back in the win column Saturday, Sept. 21, when they travel to Hammond, Louisiana, to take on Southeastern Louisiana. The Southland opener is slated to kick off at 7 p.m. from Strawberry Stadium.
•
Lamar sports information