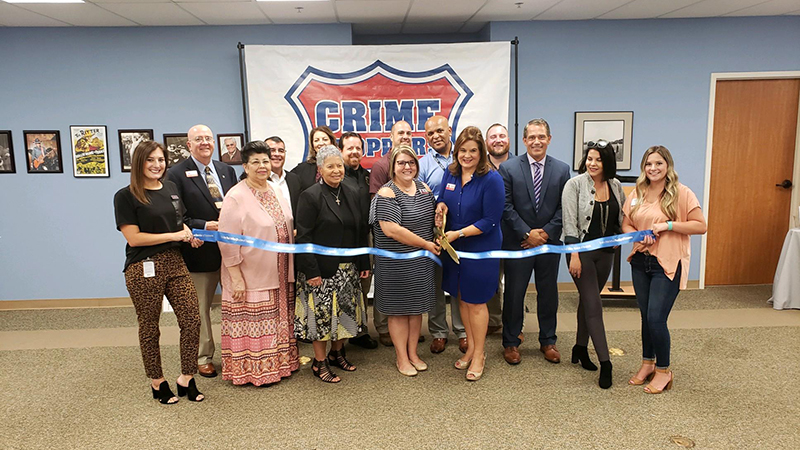 A ribbon cutting ceremony was held at 700 North St., Beaumont for the new Crime Stoppers of Southeast Texas offices in September. (Courtesy photo)

Crime Stoppers of Southeast Texas is moving into a new era but the mission remains the same — to create a safer community.

And doing so takes partnerships.

One of those partners, Port Arthur LNG, stepped up to the plate and donated $2,500, which aids the non-profit organization for awards or education efforts in the community. The donation was made during a ribbon cutting and open house Thursday for Crime Stoppers’ new home location, 700 North St., Beaumont.

“Safety is a top priority at Sempra Energy companies,” McInnis said. “We greatly value the work Crime Stoppers does in bringing together law enforcement, media and the citizens to help proactively keep our communities safer.”

Crime Stoppers was given new life earlier this year as officials with the organization met with Port Arthur police, members of the Police Chief’s Advisory Board, representatives of local apartment complexes and others.

PAPD Deputy Chief Michael Fratus is pleased the organization has an executive director, Stephanie Vanskike, and for the beneficial work to come.

“This is an avenue for people to provide tips indirectly to the police officer while maintaining their anonymity,” Fratus said. “The fact of the matter is that we recognize there are a lot of people, for one reason or another, who do not want to give info. This is an incredible tool to make the community safer, and that is Crime Stoppers’ mission, to create a safer community.”

Port Arthur LNG’s donation is a big plus for Crime Stoppers, he added.

Earlier this summer Golden Pass LNG made a very specific donation — $7,731.02, which is Port Arthur’s percentage of the cost to run the program. Donations for tips or awards are separate.

Crime Stoppers is regulated by the governor’s office and anonymity is guaranteed. No identification can be revealed about the caller, nothing can be called into a court of law. Crime Stoppers has been around since 1981 and there’s never been a reported case of a tipster’s identification being discovered, she said, adding this is a proven track record that shows the program works.