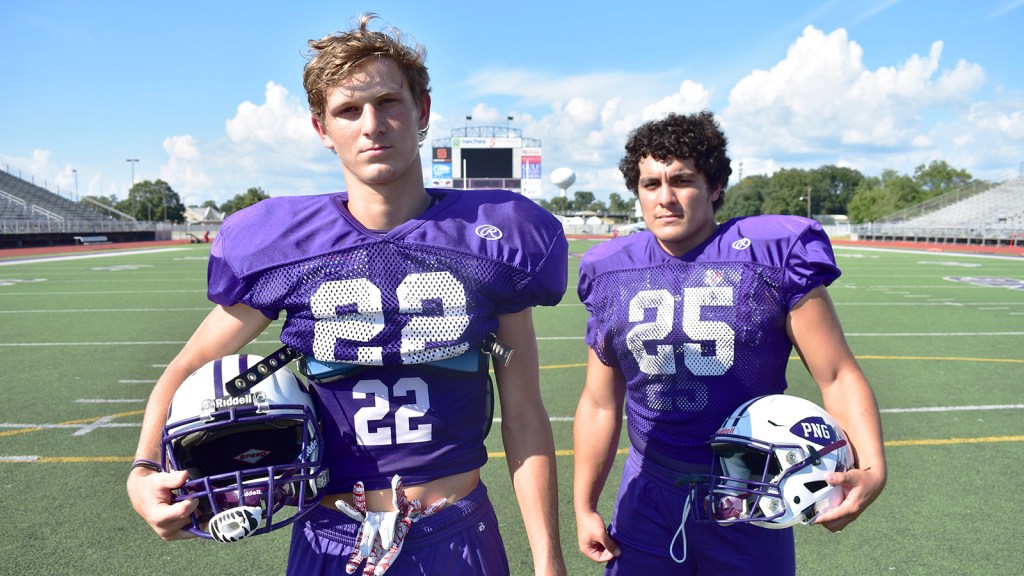 PNG’s defense, with the help of free safety Josh Pippin and linebacker Santiago Agudelo, hopes to build on a strong second half against Huntsville last Friday. (I.C. Murrell/The News) 9-11-19

PORT NECHES — Had it not been for whom Port Neches-Groves coach Brandon Faircloth called “two really good safeties,” Josh Pippin would have played some varsity minutes in 2018 as a junior.

“First of all, Josh is a wonderful player,” Faircloth commented. “He was on the JV last year. He was a starter every game. We had two really good safeties [Kade Martin and Tyler Jackson] last year that he had to play behind. He could have been on the varsity and just not gotten to play that much, so we always choose guys to get a lot of playing time, and it’s paying off for him right now.”

Pippin earned a return on his time investment with his first interception against Huntsville. The Hornets won big at Sam Houston State University, but Pippin’s stop played a part in the Indians holding an otherwise explosive team to 28 second-half yards.

“I just sat back deep, and [the quarterback] threw the ball, he left it up there and I saw it come to me,” Pippin said.

Pippin and the Indians (1-1) are hoping any adjustments made after trailing 27-0 carry over into tonight’s home opener against Tomball (1-1). Huntsville still had 249 first-half yards, 88 more than the Indians gained for the game.

“We made small changes, nothing big,” senior linebacker Santiago Agudelo said. “We knew that we’re a second-half team and we had to go out there and play better. The first half, defensively, we allowed 27 points, and we weren’t satisfied by that. We had to go out and be better. We went out with a different mentality, and I think we played a better second half.”

Pippin and sophomore Matthew Kendrick each came up with an interception.

“He is a great corner,” Pippin praised Kendrick. “He’s started the first two games we’ve had, and he’s come up with two big plays in those games.”

Faircloth said the Indians accepted and overcame adversity more than he made adjustments. Now, it’s a matter of whether the defensive play can continue in PNG’s home debut for 2019.

“It gives me chills every time I come out here to play,” Pippin said.

Tomball rebounded well from a 48-14 loss to Tomball Memorial to beat Santa Fe 42-14 last week. Former West Brook coach Kevin Flanigan is at the helm of Tomball, which beat PNG 31-21 last Sept. 15 and finished the season 6-5.

“We just have to go in there in the first half and play faster and start things off faster,” Agudelo said. “We came out a little slow, but the second half was good.”

Faircloth issued a simple challenge during the Indians’ team meeting earlier in the week, hoping the last 24 minutes in Huntsville are a harbinger for 48 minutes of defensive excellence in Port Neches.

“Let’s continue to be that team that was out there in the second half the other night,” Faircloth said. “Let’s fix our mistakes. We’ve got a long way to go like everybody else. Let’s be the team that never gives up and plays hard for 48 minutes like we did the other night.”

The Indians have waited quite a while to play at The Reservation again.

“Four road games in a row is tough,” Agudelo said, counting two neutral-site playoff games at the end of last season. “All these fans and just the atmosphere that PNG puts out, it’s a great feeling. It’s good to be home.”