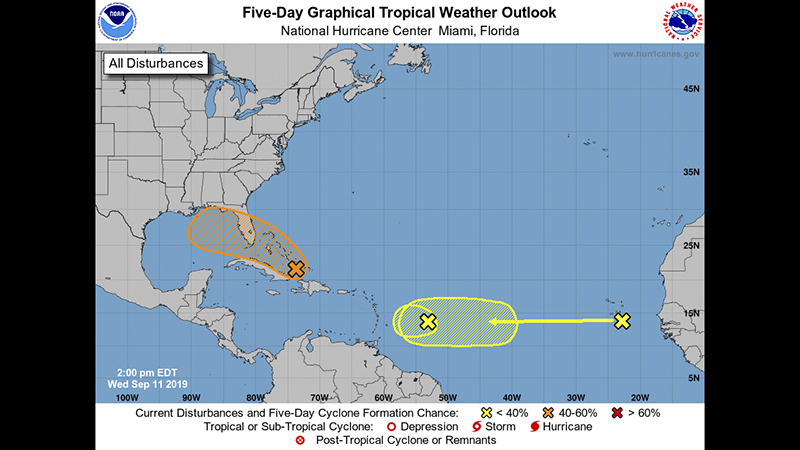 Roger Erickson, warning coordination meteorologist at the National Weather Service station in Lake Charles, La., said the tropical wave, right now a disorganized cluster of thunderstorms just below the threshold for becoming a low pressure region, could enter the Gulf by Friday or Saturday.

Once in the Gulf, the system could take three to four days to make landfall somewhere along the Gulf coast, which would be as early as Monday, though Erickson stresses it is too early to tell where the system is heading.

“It comes down to how developed it becomes,” Erickson said. “For weaker systems it doesn’t take much to steer them. These systems are the trickiest ones to forecast because they can turn really easily. A cluster of thunderstorms could pop up and they can veer towards them.

“For this case here we’re expecting high pressure off to the east, which will cause it to come into the Gulf, and then beyond that, if it becomes more organized, it could probably go further west. If it stays less organized it’ll stay off to the east.”

The tropical wave is expected to cause higher-than-normal rainfall chances this weekend, as well. Current NWS forecasts show Friday and Saturday to be sunny, with Sunday having a 30 percent chance of showers and thunderstorms in the afternoon.

Erickson said this year’s hurricane season has been busier that usual.

Camille Garcia, director of communications and public relations at the Insurance Council of Texas, recommends homeowners take steps now to understand their insurance policies and make sure their coverage is right for them.

“Until it becomes a named storm, people still have the opportunity to buy windstorm insurance if they don’t have that kind of coverage,” she said. “People sometimes forget that with the National Flood Insurance Program it takes 30 days to get that kind of coverage. While that particular insurance may be too late to get, you still have an opportunity to look into windstorm coverage.”

Garcia says homeowners should be aware that most homeowners insurance does not automatically come with flooding or windstorm coverage.

“At this stage of the game, have that conversation with your agent, your carrier, with your broker, because that agent or broker could potentially write all these policies and that agent could counsel on what kind of coverage you have and need,” she said.

Even for those without insurance, Garcia suggests residents take a little time to take photos and video of their homes and possessions in case of loss during a storm, for insurance purposes and to keep track of what needs replacing.

Beyond insurance, Garcia says residents should always take precautions in the event of a storm to make sure doors, windows and openings are barricaded, all inside doors are closed, and garages are braced shut.