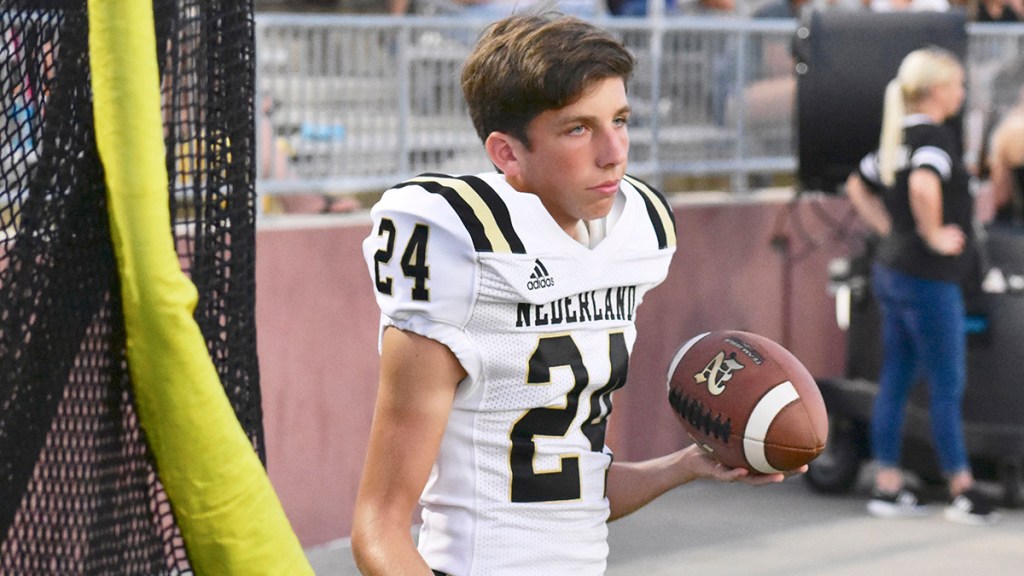 NEDERLAND — All those days of playing soccer and carrying on a family name at Nederland High School seems to help junior Payne Barrow continue to do the latter on the football field.

“It helps a lot, just keeping in shape and keeping my legs moving,” he said.

So, the third-year varsity player is just fine going in to finish drives with a field-goal attempt or top touchdown marches with an extra point, becoming almost automatic at the latter — with uncle and head coach Monte Barrow closely watching.

“It’s good because we have, since we know each other, we trust each other,” Payne Barrow said.

The younger Barrow, whose father Keith coaches the Nederland boys soccer team, has a made a career-best mark in an otherwise rough start to the season for the Bulldogs (0-2). Barrow split a 45-yard attempt through the uprights to narrow the deficit against Beaumont United to 14-10.

“His body is maturing, he kicks year-round, playing soccer,” Monte Barrow said. “That part of it and understanding being in the weight room can help you, I think he realizes that. The stronger he feels, the more confident he is.”

Payne’s previous long was 41 yards, one of his four made field goals last year. He’s 1 for 3 this year, however, missing a 47-yard try into the wind earlier against United and coming up short on a 41-yard try against West Orange-Stark.

Payne Barrow put enough leg into a 52-yard try during an Aug. 22 scrimmage against Memorial in Port Arthur, but the kick sailed just to the left.

Just as the Bulldogs bank on him to convert extra points — he’s 44 for 45 since last season and 3 for 3 this year — Barrow was banking on his career-long kick giving the Bulldogs momentum into the second half. Instead, United was too much in a 35-10 victory.

He points his strength and accuracy to a camp at Texas A&M this summer. He hasn’t drawn any collegiate offers just yet, but there could soon be a need for someone who can kick from 45 yards out or longer.

“I’ve just been kicking a lot throughout the summer and working out,” he said.

The 5-foot-9, 150-pound Barrow made 33 extra points and three field goals as a freshman. His 42 points trailed only Port Neches-Groves’ Landon Sandell (51) for points by kicking in then-District 22-5A.

His favorite high school moment was getting to kick at NRG Stadium during last year’s 5A Division II area-round game against Marshall (northeast Texas). He converted a 29-yarder early in the fourth quarter to pull Nederland within 28-24, but the Mavericks scored 35 unanswered — including six on the onside kickoff return and the following two-point conversion.

Barrow was once asked to play receiver, but he already knew where his heart was set and didn’t even need to sleep on it.

“It wasn’t that hard of a decision,” he said.