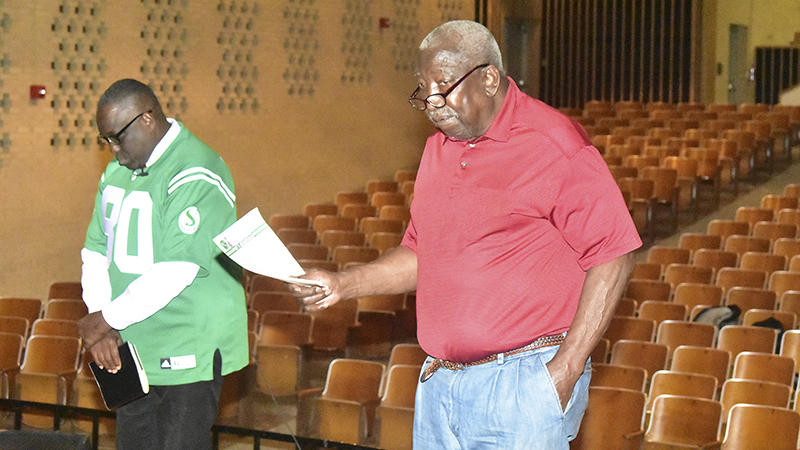 College football coaching icon Eddie Robinson spent a night at Dick Williams’ home in Port Arthur in or about 1955, hoping the Lincoln High School senior quarterback would join his forces at Grambling State.

“A.W. Mumford, the Southern coach, comes into the house and then snatches [Williams] away,” said Glenn Mitchell, the principal of Memorial High School who was Williams’ nephew. “My grandmom, which was his mom, tells Dick, ‘You’re going to Southern University because it’s a lot closer.’”

Four seasons later, Williams, whose older brother Edgar played at Wiley College, became a black college All-America receiver at Southern and was drafted by the Philadelphia Eagles. Port Arthurans, however, will remember Williams more for the lasting impact he made on Lincoln football players as a coach from 1960-2000.

“He blessed a lot of people,” Canadian Football League Hall of Famer and 1983 Lincoln graduate Don Narcisse said. “He’s a class-act guy. He’s kind of like me, will help anybody, outgoing and will spit some knowledge out.”

Williams died at 11 a.m. of complications from a fall he sustained in a shower, Mitchell said. Williams and Mitchell, a 1966 Lincoln graduate and football standout, were inducted along with 1976 Lincoln alumnus and former Notre Dame linebacker Bobby Leopold into the Prairie View Interscholastic League Coaches Association Hall of Fame in 2018.

“It was really touching as a player to be inducted as one of his pupils,” Mitchell said.

Williams was quarterback of Lincoln’s 1954 PVIL state championship team and earned black college All-America status at Southern, located in Baton Rouge, Louisiana, in the 1957 and 1958 seasons after earning honorable mention as a sophomore, according to Mitchell. The Pittsburgh Courier, a widely circulated African American newspaper, selected players from historically black colleges and universities at the time for its All-America teams.

In 1959, the Philadelphia Eagles selected Williams in the 23rd round (267th pick overall) of the NFL draft. Williams spent one season in the league before returning to Port Arthur to coach at Lincoln.

Williams was a receivers, defensive end and special teams coach at Lincoln when Mitchell played. Most of Williams’ time at his alma mater was spent under Joe Washington Sr., who won four district championships (1971-73, 1985) at the helm and mentored a number of players who eventually turned professional, including Joe Washington Jr., Leopold and Narcisse. Brothers Jonathan and Jordan Babineaux, who played under Williams at Lincoln in the late 1990s, went on to NFL careers as well and each made an appearance in the Super Bowl, as did Washington Jr. and Leopold.

“If it wasn’t for him that spoke up for me to get a scholarship, I wouldn’t have gotten my only scholarship,” said Narcisse, a 1986 All-America receiver at Texas Southern and 13-year Saskatchewan Roughriders veteran. “He knew the recruiter. He told the recruiter, ‘I know you’re looking at [quarterback] Ken Vaughn, but you need to look at Don Narcisse. He works hard and can catch a BB in the dark.’”

Vaughn and Williams appeared at Lincoln Middle School last Friday to hear Narcisse give a motivational speech to young players there.

“He wasn’t my receiver coach, but it’s like, sometimes you get a promotion and you’ve got to have someone who can speak up for you and vouch for you about the good things you’ve done,” said Narcisse, adding Williams coached tight ends when he was at Lincoln. “Like he told the kids: ‘You’ve got to follow the process, but the process is this: You’ve got to be a good person. You’ve got to do your schoolwork.’ People are going to help people who are doing good things.”

Mitchell said he had dinner with Williams on Sunday and watched a game with him Monday.

Born June 30, 1936, Williams was preceded in death by his wife Deloris 13 years ago. Williams’ death comes two days after the passing of his Lincoln classmate and two-time state tennis champion, Levi Adams.

“I guess I want people to remember he had a kind spirit, was always willing to help somebody and never met a stranger,” Mitchell said.