Player of the week: Titans’ Augusta made most of opportunities 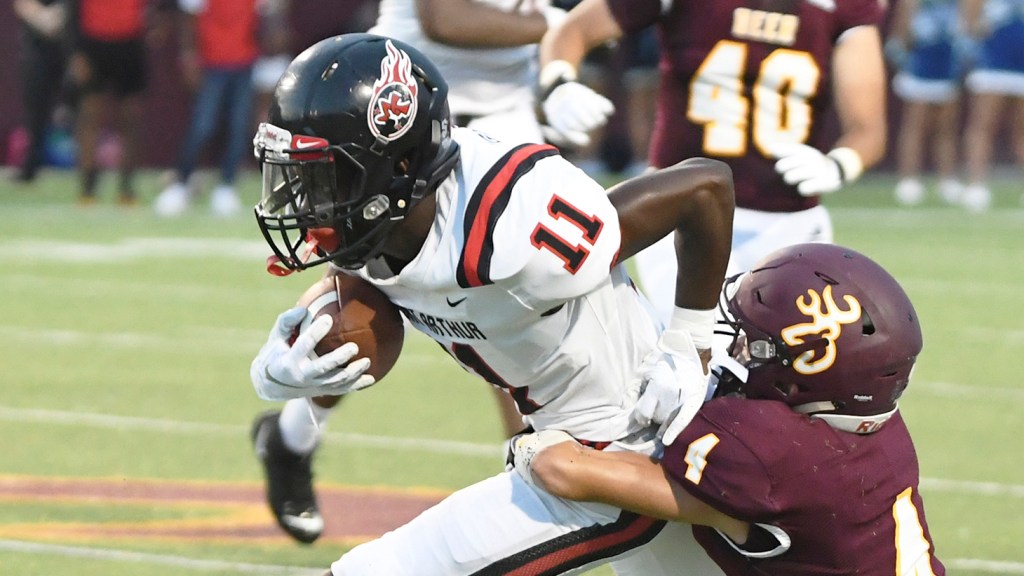 Tyrence Augusta of Memorial drags a Deer Park defender for a first down in an Aug. 30 game at Deer Park. Augusta rushed for two touchdowns against Houston Madison on Sept. 6. (Jereem Augustine/Special to The News) 8-30-19

Give Tyrence Augusta a little, and the Memorial junior can make a lot of happen.

He’ll also be grateful for any opportunity.

A wide receiver converted from running back, Augusta caught two passes against Houston Madison at Butler Stadium on Friday. The first one, a shovel pass from Jah’mar Sanders, went 60 yards and a touchdown on the first play from scrimmage. The second was a regular pass from Brian Milton and went 11 yards for the final score in a 35-0 win.

The scoring started with Augusta, and it ended with him. Now, he’s The News’ player of the week.

“He’s an explosive guy,” Titans coach Brian Morgan said. “He’s got a lot of upside. We really like Ty, and he’s spent the offseason learning the offense from a receiver standpoint. Last year, it was a little simpler to play running back because that’s what you have to know, and that’s why we were able to play him some at running back because he’s really an explosive football player.”

With depth at running back, Augusta played his breakout game in Week 10 last season at home against Houston Wisdom. With only seven carries, Augusta produced 159 yards and four touchdowns that night.

Instead of returning to the backfield, Augusta has been lining up on the outside since spring practice for what he calls “a better opportunity” to help out the Titans.

“Touching the ball more and doing what I have to do to help the team win and go to state, because that’s my main focus right now, help the team win, going to state and then winning state,” Augusta said.

The jet-sweep that opened Friday’s victory, though, proved emblematic of what Augusta can do on the ground and with just one or a few touches. Morgan said he still takes carries in practice, adding he’ll put Augusta back in the backfield only if necessary.

Even with 107 yards on four catches this season, Augusta says he misses making a home in the backfield at times.

“Here and there. I’ll ask coach Morgan can I get in there at running back, and he’ll make a joke about it,” he said. “We’ll just see and go from there.”

Other top performances from this past week among Mid- and South County players: