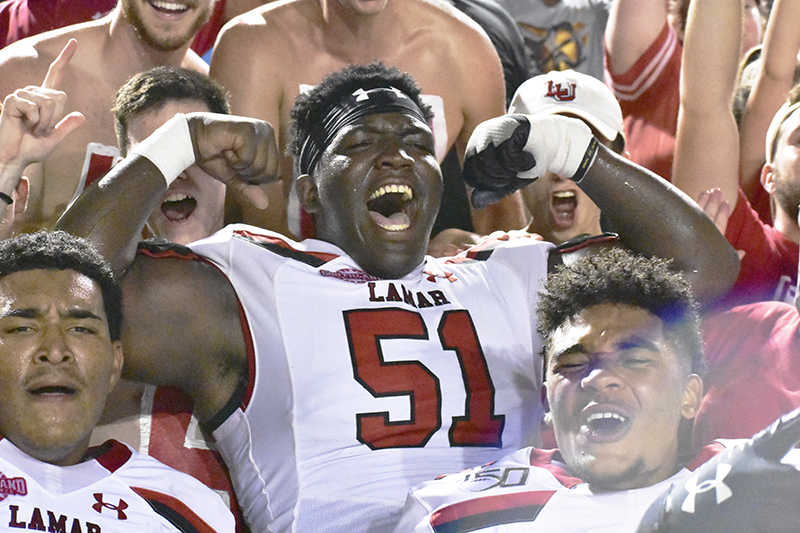 The extra period was set up by a 2-yard touchdown run from senior Jordan Hoy with 31 seconds remaining in regulation.

“This was an ugly win tonight, but a win is a win,” said Mike Schultz. “This is a game that I don’t think we would’ve pulled out two years ago.

“I thought Bailey had a good night. He hit some (kicks) in crucial times and made big kicks when we needed him to,” added Schultz.

The Cardinals finished the night with 437 yards of total offense – 164 of which came in the fourth quarter and overtime. LU rushed for 204 yards. Big Red held MVSU to 301 yards of offense in a game that was dominated by the defenses.

Hoy finished the night completing 21-of-39 passes for 233 yards. He also carried the ball 18 times for 68 yards and two scores. Junior Myles Wanza led the Cardinals ground attack with 22 carries for 91 yards. 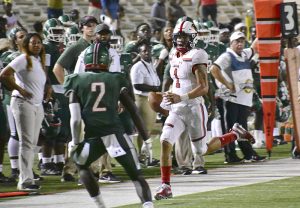 Lamar quarterback Jordan Hoy rushes for a first down on a game-tying drive that led to his 2-yard touchdown run late in regulation as Jamenta Shaw of Mississippi Valley State closes in on the play Saturday in Beaumont. (I.C. Murrell/The News) 9-7-19

Junior Dallas Martin led an LU defensive effort with a career-high 14 tackles. He was one of three Cardinals to finish the night with double-figure tackles – seniors Darien Wilson (11 – 3.0 for losses) and Isaiah Spencer (10).

The Delta Devils drew first blood with a touchdown less than 4 minutes into the second quarter. The score woke up the LU offense as the Red and White responded with an eight-play, 70-yard drive that ended with a Hoy two-yard run. The Cardinals took their first lead early in the third quarter when Giffen drilled a 22-yard field goal.

MVSU answered back just over 7 minutes later with a 4-yard pass from Dejerric Bryant to Johnny Wilson, but Valley couldn’t convert the point after try as their lead remained 13-10.

LU was kept off the scoreboard until 5:39 remaining in the fourth quarter when Giffen tacked on a 39-yard field goal. The kick tied the game at 13. The Delta Devils responded just over 2 minutes later with what appeared to be the knockout punch when Bryant rattled off a 22-yard run for the touchdown.

The ensuing possession saw LU face two crucial fourth down plays both times being converted on passes from Hoy to Wanza. If that wasn’t enough suspense, Hoy also kept the drive alive on a third-and-10 play when he rattled off a 14-yard run down to the MVSU 26 yard line. On first-and-goal from the four, Hoy lobbed the ball into the back of the end zone but the pass fell to the ground incomplete. Pass interference was called on MVSU’s Isaiah Latham to set up first-and-goal from the 2 with seconds remaining. Hoy carried the ball over the goal line on the very next play to force the overtime.

Giffen’s overtime field goal came after a possession that saw LU get called for a hold on the first play, and Hoy get dropped for a 5-yard loss on third-and-7. After claiming what would be the final lead of the game, Big Red’s defense came out on the field and asserted their dominance pushing MVSU backward on three consecutive plays, forcing the Valley to face a fourth-and-25 pass that fell harmlessly to the ground on the final play of the game.

The Cardinals return to action Saturday, Sept. 14, when they hit the road for the first time this season at Texas A&M. The game against the Aggies will kick off a 6 p.m. from Kyle Field and will be televised on either ESPN2 or ESPNU.