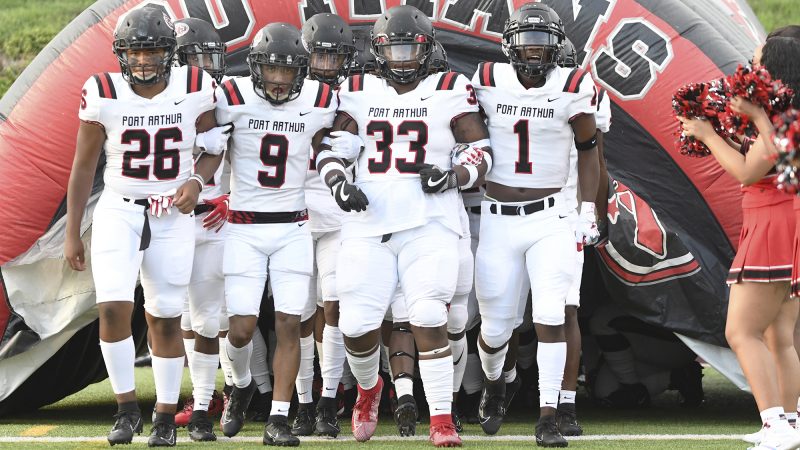 The Deer scored a 25-20 win in a back-and-forth duel, but Morgan felt certain they had nothing to do with the Titans’ woes.

“Nothing,” Morgan said while giving second-year Deer Park coach Austin Flynn credit. “Coach Flynn does a good job, but absolutely nothing. We just had some guys that are kind of living off last year’s accolades.”

Among those accolades, the Titans’ defensive line wreaked plenty of havoc and collected more than 40 sacks in 2018, and Jatavian Neal, now a senior, picked off three passes. The Titans reloaded defensively despite sending a number of players to college on scholarships, but they also allowed (officially) 352 yards, which currently ranks sixth out of eight District 9-5A Division I teams.

So, Morgan has a challenge for the defense, which found a bright spot in junior Maleek Jones intercepting a pass.

“I thought they were going to lay down because of who we are and what our defensive reputation was, and [we had] some seniors who didn’t go out and play very hard,” Morgan said. “That’s something we’re not going to have happen. Like I told those guys, we’re going to play some sophomores this week because I’m not going to watch that.”

Memorial (0-1) had previously lost a season opener in 2015, dropping a 31-30 decision at home to Ozen following a touchdown with 9 seconds left. A win against Houston Madison at Butler Stadium (13755 S. Main in Houston) tonight will help the Titans avoid their first 0-2 start since 2005, when they started 0-3 (lost to John Tyler, Lufkin and Midland Lee).

Madison (0-1) is trying to rebound from a 36-6 loss against Houston Westside.

“I got a chance to watch them last week, and I think Shawn is doing a good job in getting that program kind of turned around,” Morgan said. “The kids are playing hard for him. He’s doing some good things with the people on his staff.”

Memorial won last year’s meeting 47-14 in Port Arthur, but Madison responded with back-to-back wins over Houston ISD rivals Northside and Milby. Playing in a loaded District 11-5A Division II (including state runner-up Fort Bend Marshall, Manvel and Willowridge), the Marlins have only won once since the Milby game and missed qualifying for the playoffs by one game.

“We’ve got to go out there and compete and do our job,” Morgan said. “Things that happened to us last week were self-inflicted. It wasn’t anything that Deer Park did. Especially, defensively, we’ve got to play harder. We didn’t play hard enough. If we’ll take care of that, we’ll be fine throughout the season.”

Offensively, Morgan expects junior Branden Chaney to be ready despite a minor foot injury that slowed him down in the second half of his return to the lineup since an undisclosed injury sidelined him late last season. Chaney officially rushed 16 times for 53 yards last Friday.

“The second or third play [at Deer Park], he got his foot stepped on and it kind of rolled around,” Morgan said. “Some of that second half, he wasn’t as effective. I think that kind of hurt us some because he’s a very good inside runner. Kason [Williams] did a good job, but having him get those tough yards in the fourth quarter would have helped. Injuries are something we’ve got to deal with, and that’s part of football. We’ve got to get other guys ready to go, as unfortunate as some of those injuries are.”