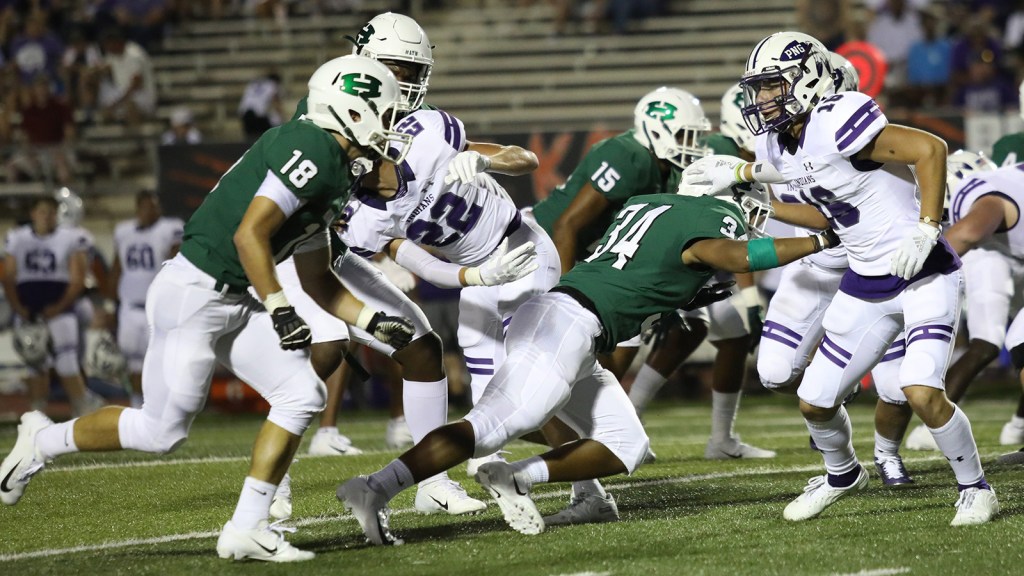 HUNTSVILLE – A 27-point first half explosion by Huntsville proved to be too much for Port Neches-Groves to overcome here Friday night as the Hornets rolled to a convincing 27-10 victory over the Indians.

The Indians even their season record to 1-1, while the Hornets improve to 2-0.

Holding the hosts without a point in the second half, though, was somewhat of a moral victory for Brandon Faircloth’s Indians.

Of course coaches usually don’t buy into “moral victories,” but considering how outmanned the Indians were in first two periods and then to come out in the final second half and blank the Hornets potent offense, well PNG’s players left Huntsville with a somewhat better taste in their mouths than earlier.

Tate Sandell kicked a 27-yard field goal with 0:36 remaining in the contest to trim the final margin to just 27-10.

A big play in the drive was a 32-yard burst up the middle by Indian junior Dejaunte Conner to the Hornets’ 10. After having Huntsville rack up 16 first half first downs, the Indians’ defense showed lots of spark, holding the Hornets to only one second half first down.

The Indians also forced Huntsville to punt three times in the final half.

On the other hand, PNG ran up nine second-half first downs.

Indicative of how well the Indians played in the second half was the fact they outgained Huntsville 121-28 yards after falling behind by 27 points. The Hornets also failed to complete a pass in the final two stanzas going 0-4 through the airways.

Mathew Kendrick and Zachary Bourgeois each had interceptions for the Indians.

Following an impressive first-game performance against Silsbee, Indian junior quarterback Blake Bost didn’t fare so well against a Hornet defensive front that forced him to run for his life most of the night. Bost completed 15 of 28 passes for only 90 yards, but again the young signal caller didn’t throw an interception.

His best throw of the night came late in the third when he connected on a perfect pass to junior Ryan Sosa for 18 yards to the Hornet 1-yard line. Sosa took a hard hit but held on and the Indians would score one play late on Zane Hernandez’ 1-yard dash with 4:25 of the third. It was 27-7 at that point.

After a difficult first half trailing 27-0 to the Hornets, the Indians came out in the second half with an increased intensity and forced Huntsville to punt on three consecutive possessions.

Hernandez put the Indians on the board midway in PAT cut the Hornet lead to 27-7 with just under 5 minutes left in the third quarter.

The Indian touchdown was set up by an excellent 18-yard strike from Bost to junior Sosa down to the Huntsville 1-yard line.

It was a first half that was pretty much a nightmare for the Indians. Huntsville outgained the visitors 249-40 in the opening two periods to stake its home team to a 27-0 lead going to halftime. Using speed around the corners and over the top of the PNG secondary, the Hornets started fast on their opening drive and didn’t really slow up.

PNG’s rush offense was almost non-existent in the opening half as Huntsville’s defense held the Indian to just 13 yards on 11 carries.

Myers torched the Indian defense with touchdown runs of 1 and 4 and caught a perfect pass from Carter good for 22 yards and another score.

Sophomore kicker Christian Avelar also added a pair of field goals of 25 and 32 yards and was perfect on three PATs.

In the opening half, Huntsville outrushed the Indians 123-13. In the aerial game, backup quarterback Carter, who was subbing for injured starter Mathew Southern, completed 9-of-18 passes for 126 yards and one score.

It didn’t take the Hornets long to let the Indians know it just might be a long night as wingback Nate Hambright took a pitch around right end for 35 yards on the first offensive play on the night.

Avelar’s 25-yard field goal with 7:33 left in the opening quarter got the Hornets on the board and the hosts were off to the races.

The Indians were three and out on their first series, and Huntsville made them pay going 48 yards in five plays culminating in Myers’ 1-yard plunge, making it 10-zip with 4:46 still remaining in the first.

After another three-and-out for the Indian offense, the Hornets drove 47 yards in nine plays to make it a 17-0 lead. The key play was Myers’ 22-yard touchdown reception down the right seem of the Indian secondary at the 5:48 mark of the second.

It was again PNG’s inability to mount any offense with yet another three-and-out. Josh Patteson’s 32-yard punt was returned 30 yards by Jaden Schroder to the Indian 33.

A nifty 20-yard scramble by Carter to the Indian 13 set up the final score of the halftime. Myers dashed four yards to paydirt with 3:31 left before halftime and Huntsville led 27-0 at halftime.

Huntsville scored on its opening two possessions to take a 10-0 late in the first quarter, then the Hornet defense forced PNG to punt five times in the opening half and led 27-0 at intermission.

PNG’s Conner, who help cut the Huntsville lead to 27-10 with a 34-yard blast up the middle setting by Sandell’s 32-yard field goal in the final minute of play.

After a pair of road games to start the 2019 season, the Indians return to the friendly confines of The Reservation on Friday, Sept. 13, hosting Class 5A Tomball. Kickoff is set for 7:30 p.m. Huntsville, on the other hand, travels to College Station next week.