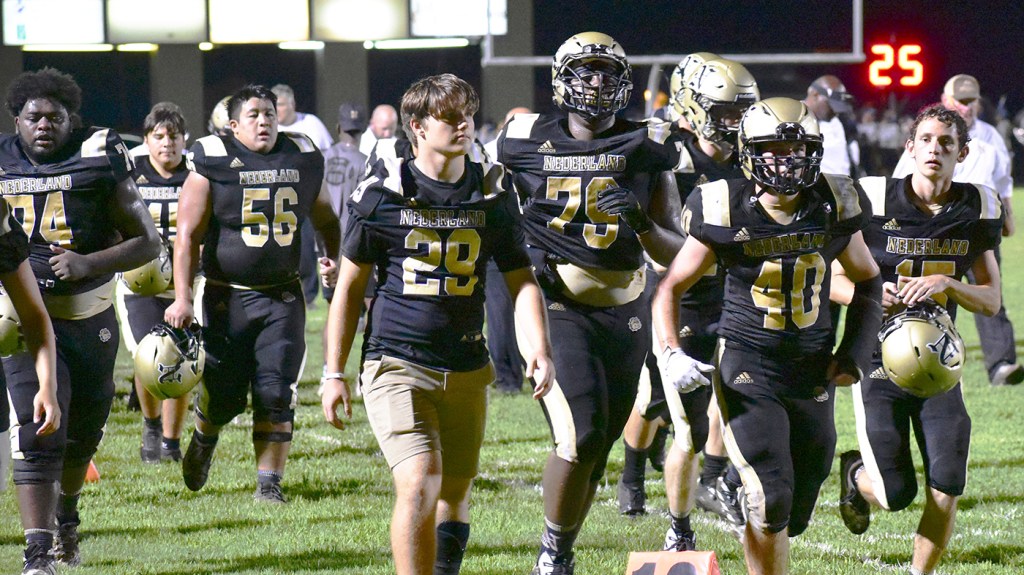 Nederland players head to the dressing room for halftime while trailing West Orange-Stark on Friday in Nederland. (I.C. Murrell/The News) 8-30-19

In Barrow’s case, playing a day sooner than Friday takes away from the wait after a one-point loss to West Orange-Stark.

“There’s only one way to get a sour taste out of your mouth, and that’s to go play someone else,” the third-year head coach said. “We were fortunate to have one less day to have to wait this week. Hopefully we can do things right to allow us to do that.”

Louis doesn’t have much of a say in what day of the week the Timberwolves (1-0) can play, sharing Beaumont ISD Stadium along with 6A Division II runner-up West Brook.

In the second year of United’s existence, the Timberwolves find themselves on the flip side of last year’s Week 2 scenario. Only practicing together since last summer (because Central and Ozen high schools were still in operation), they were trying to recover from a humbling debut loss to Houston St. Pius X. Instead, Nederland won 33-14.

“They look more comfortable in what they’re doing,” Barrow said. “I knew when we scheduled them for a two-year non-district schedule that the first year would be tough for them because they weren’t together the spring before that. That’s tough for any program that’s starting. But you can tell the work they put in and being together, the coaching staff has done a great job of putting those kids together and getting them to play like they’ve been playing. They’re super-athletic, talented and big up front.

“It’ll be the same this week. If we’re moving backwards and we’re not taking care of our business, it’ll be a long night.”

The player that has Barrow’s attention the most is 6-foot-3 Timberwolves senior quarterback Zemaiah Vaughn.

The Bulldogs began to match West Orange-Stark’s intensity as last Friday’s game wore on and got all three of their touchdowns from the junior backfield pair of Kade Scott and Josh Mazyck.

If the Bulldogs play the way they did through the final three periods of that game, Barrow will have no problem with that.

“We had to stop shooting ourselves in the foot, first of all,” Barrow said. “I told them before the game and after the game, you can’t do that against a team like West Orange-Stark and get yourself behind the chains. When you do get a chance to make a big play and having it called back because you had a penalty that you can control … we settled down a bit. We didn’t hurt ourselves and we established drives.”