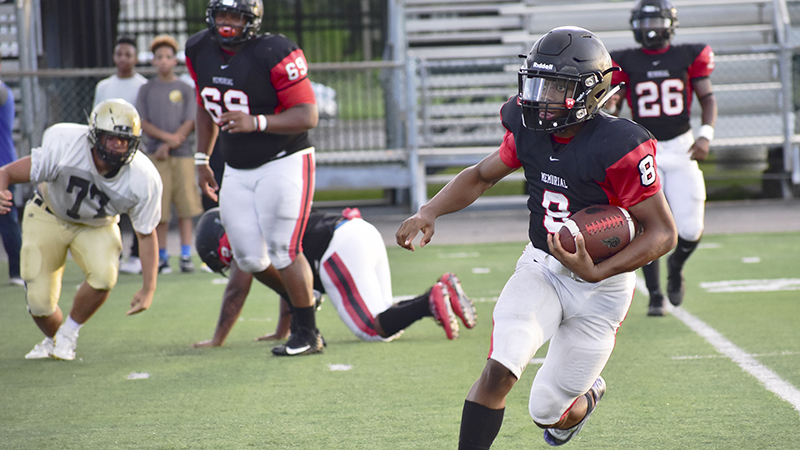 Jah’mar Sanders heard all the criticism about his passing ability by the time he started his varsity career at Memorial. Neither of his coaches bought into the talk.

“For people who’ve been around him that would say that’s his weaker, I guess, characteristic as opposed to running, … he threw the ball well and made some throws,” Titans head coach Brian Morgan said. “We were very pleased with him Friday night.”

Not only did Sanders, a sophomore, make plays with his feet — he netted 80 rushing yards and a touchdown on 10 carries — he completed 10 of 18 passes for 135 yards and two scores in his varsity debut. All the Titans (0-1) were missing was a victory, as host Deer Park scored the go-ahead touchdown with 3:11 left in a 25-20 victory.

“The first drive, I felt a little uncomfortable,” Sanders said. “But as the game progressed, I got more comfortable with the line and the receivers.”

“I got to be with him my first year, and I’ve seen him grow so much,” Smith said. “A lot of people knock on him because they say he can’t throw as good and he’s a runner, but over the summer, he’s really taken initiative and kind of prided himself on throwing. He’s also becoming a leader to the other guys, too.”

Not so long ago, Sanders was battling for the starting role against senior Brian Milton. Both shared snaps during a scrimmage against Nederland and performed well.

Sanders played at quarterback on every snap against Deer Park. He ran 68 yards for the opening touchdown almost 5 minutes into the game.

“He makes really good decisions,” Morgan said. “That’s why he won the job. He’s a really, really intelligent football player, even being a sophomore. He takes coaching well. He makes good decisions and doesn’t make mistakes. That’s been one of the best things about him.”

Case in point: The Wednesday before the Deer Park game, Morgan explained, Sanders changed up a formation because he wanted to throw to senior Chan Rubin on a matchup situation. In the game, Sanders connected with Rubin on a 9-yard strike that helped Memorial take a 13-12 lead.

Sanders then hit Alex Ned for a 59-yard touchdown pass near the end of the third quarter that put the Titans back in front of a back-and-forth duel.

“He’s an intelligent football player,” Morgan said. “When you get in the film room with him and say, ‘Hey, why did you throw it to this guy? He’s not just out there throwing. He understands personnel, who’s on the field, concepts … he’s a really sharp guy.’”

Sanders will be back under center when Memorial visits Houston Madison on Friday at Butler Stadium. It’s a sign that Sanders has answered every question about his maturity and confidence with plenty of football ahead of him.

“I’ve been playing quarterback since I was small, so coming in I already knew what I had to do,” Sanders said. “I had to move fast, learn quick.”