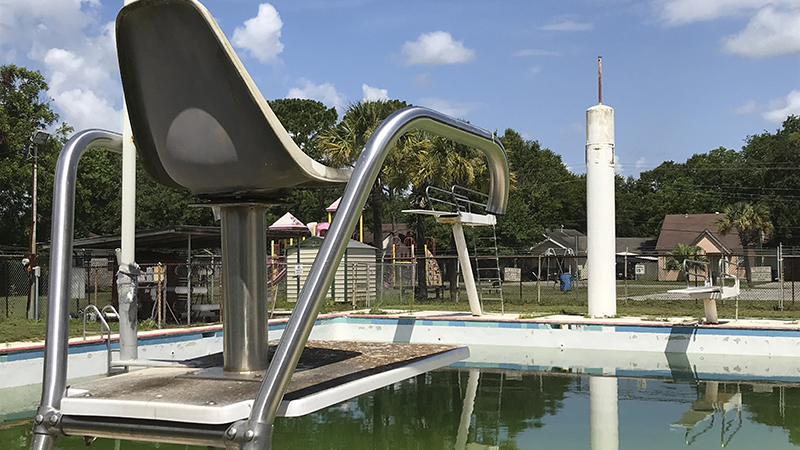 The swimming pool at Lakeview Park in may be replaced by one of several features. Residents can weigh in at a community meeting Thursday. (The News file photo)

Lakeview neighborhood residents will get their chance to weigh in what they’d like to see as features in their neighborhood park.

Chandra Alpough, Port Arthur’s director of Parks And Recreation, said the pool, built some 50 years back when Lakeview was a separate municipality, is too damaged to salvage, but area residents have, in passing, suggested a host of ideas for how they’d like to see the city develop the existing parkland.

“We have had several citizens wondering about the status, and when we can move forward,” she said recently. The pool itself has been closed a second consecutive summer.

Alpough said some residents have said in informal discussions that they’d like a soccer field, splash pad or volleyball courts. She said the city has some money in reserve to enhance the park, but city leaders want more citizen input before they enact plans.

That’s why the Parks and Recreation department will host a 6 p.m. Thursday meeting at Amos J. Evans Multipurpose Building, 1308B Ninth Ave., where citizens can see suggested plans that have been drawn up by contract engineers.

“The people can come and give their input about what we should do,” Alpough said.

“The engineers will do a presentation about what they have come up with.”

That discussion will advance city plans for enhancing the park.

In June, City Councilmembers approved a $39,360 contract with Sigma Engineering of Beaumont to design a splash pad and soccer field at the pool area. That would rid the city of a continuing problem with crumbling infrastructure there and revamp the park to better serve the neighborhood’s population.

The pool sustained pipe failures and needed constant repairs for the fence and leaks. The pool house was beyond repair, the deck was deteriorating and pumps needed replacement.

But neighbors nonetheless use the park area, she said, gravitating to the parking area and setting up volleyball nets for play.

District 2 Councilman Cal Jones said he lives near the park. He said in June that the neighborhood is home to many Hispanic and Latino residents, who seem to prefer soccer as a sport. He said he’d like the city to accommodate them with a field.