Authorities scramble to restore 911 services: “We have never had this happen before” 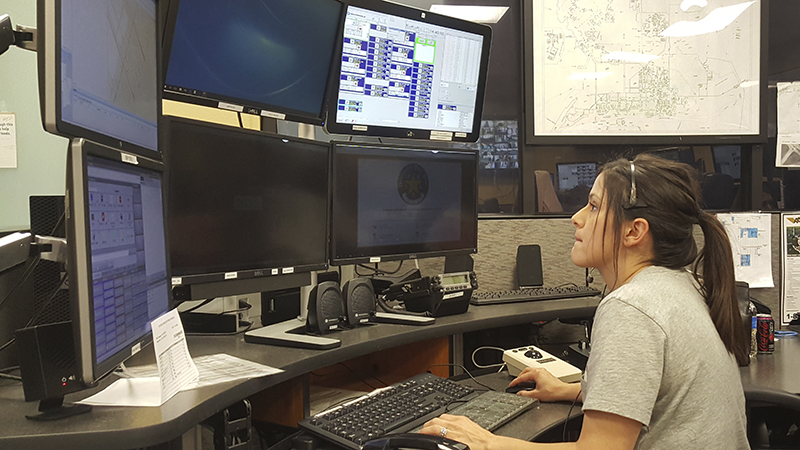 Christian Gutierrez, telecommunications officer with the Port Arthur Police Department, gets ready to take a call at the police station in this photo taken in April 2018.

The 911 system covering Jefferson, Orange and Hardin counties went offline for about 14 hours — some areas for longer — on Wednesday.

Pete DeLaCruz, director for emergency communications with the South East Texas Regional Planning Commission that oversees the system, said they were alerted of the issue at approximately 12:42 a.m.

The three agencies that monitor 911 systems, National Public Safety Solutions, AT&T and Intrado, caught the problem and immediately notified DeLaCruz, according to a news release.

The problem originated in the downtown Beaumont area after three pumps responsible for keeping water out of the AT&T conduits failed. Water seeped into the system causing some of the phone conduits used to manage and route 911 calls for the region to short circuit, he said.

The Mid-County area’s emergency dispatch office is located at the Nederland Police Department, and Nederland Police Chief Gary Porter said there was a period of time when callers would get a busy signal when dialing 911 before the calls were rerouted to administrative offices.

To further confuse the issue, the automated phone answering system that sent calls to administrative offices told callers to “call 911 if this is an emergency.”

Porter said the automated message had to be turned off.

He added he didn’t hear of any major issues during the down time.

Port Arthur Police Deputy Chief John Owens was aware of the issue on Wednesday and had not heard of any major issues either. Calls were rolled over to the police and fire departments’ main lines.

“We have never had this happen before,” DeLaCruz said. “The program has been online since December 1991 and we’ve never had an outage of this nature, even during Harvey. The system held up under a tremendous amount of calls.”

He said the agency will be reviewing and analyzing what transpired and identify solutions to ensure this doesn’t happen again.