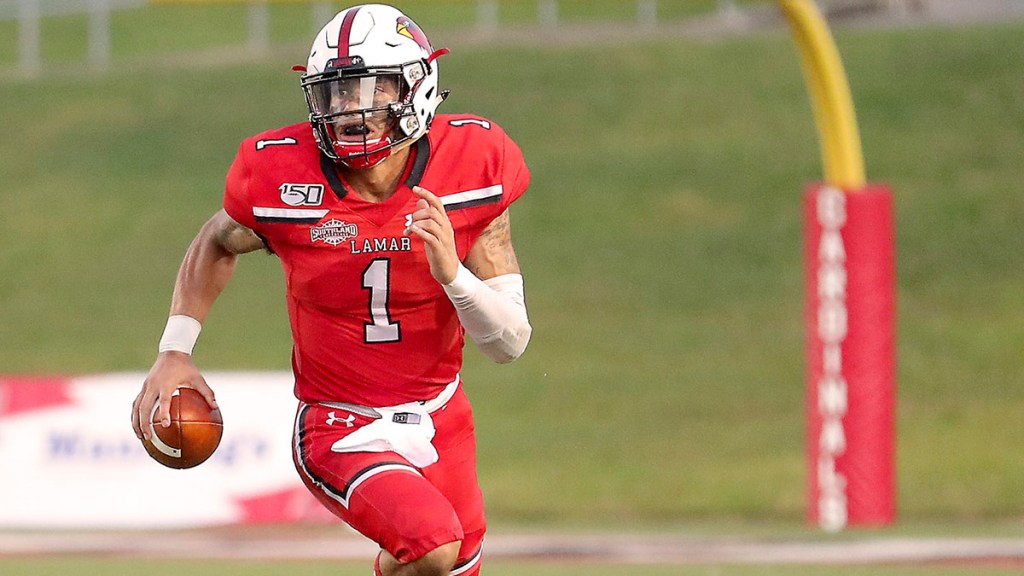 BEAUMONT — Lamar took care of business against an NAIA program Thursday night, and the Cardinals are seeing an early profit.

The website College Sports Madness has ranked Lamar No. 23 in its Week 1 top-25 poll, marking the first time in program history the Cardinals have been voted into such a poll. Lamar also received votes in the STATS FCS (21 voting points for 45th) and American Football Coaches Association top-25 polls (nine points for 31st).

The Cardinals won by a big margin, as expected, against the NAIA’s 16th-ranked Bethel University of Tennessee. Rather than celebrate that or the fact the Cardinals have made a top-25 poll, Schultz analyzed a Thursday performance that saw his Cardinals total 658 yards (344 rushing, 314 passing).

“There’s still much improvement that needs to be done on defense,” Schultz said. “We have to tackle better. We had two penalties that extended drives that eventually led to points. They had four explosive plays; we like to keep that number down to three explosive plays.

“Offensively, we played well on third down. We liked our ability to run and throw the football. We had a number of explosive plays, which was nice. Obviously, the big thing we’ve got to do on offense is do a better job of taking care of the football. We put the ball on the ground too many times. We had too many turnovers. If that happens, that’s going to get you beat.”

If anyone was an obvious MVP, it was senior quarterback Jordan Hoy. He rushed for three touchdowns and threw for three more, all in an 18-for-24, 226-yard outing with an interception.

“We felt Jordan came in and had a solid game,” Schultz said. “There are areas he can improve on. The old coaching cliché is that you make your most improvement from the first to the second game, and no doubt, we’ve got some areas we need to improve on in this football team.”

Senior Derrion Randle and junior Cole Starnes gave the Cards’ rushing game a post with 79 and 72 yards, respectively. Each ran for a touchdown, but Randle nearly averaged 16 yards per carry.

Mississippi Valley State (0-1) nearly scored a big upset for the Southwestern Athletic Conference on Saturday against Tennessee State in Nashville. The visiting Delta Devils, based in the western Mississippi town of Itta Bena, were 31.5-point underdogs at Nissan Stadium and actually led 13-10 at one point, but lost to the Ohio Valley Conference’s Tigers 26-20 after being stopped on downs near the red zone.

“Tennessee State was very fortunate to get out of there with a win,” Schultz said. “They had their opportunities to beat them. … Obviously, Mississippi Valley is a much improved football team. They’ve done a really nice job through the year. I think their coaching staff has done a great job. You can see the improvement that they made from Year 1 to Year 2. They’re a little more versatile on offense as well and they’re doing a few more things defensively.”

SOUTHLAND IN THE TOP 25

The College Sports Madness poll is not heavily endorsed by NCAA sports information directors, like the STATS FCS and AFCA polls. Each conference uses a combination of journalists and SIDs as voters in the STATS FCS poll, including Lamar’s James Dixon and KLVI-AM 560’s Harold Mann.

Nicholls State is the highest-ranking team from the Southland in the STATS poll at No. 10, following a 49-14 loss to Kansas State. Central Arkansas dove into the rankings at No. 20 following its 35-28 upset win at Football Bowl Subdivision member Western Kentucky, Southeastern Louisiana entered the poll at No. 23 after pounding then-No. 6 Jacksonville (Alabama) State 35-14, and Sam Houston State dropped two spots to No. 25 after giving New Mexico a scare but falling 39-31.