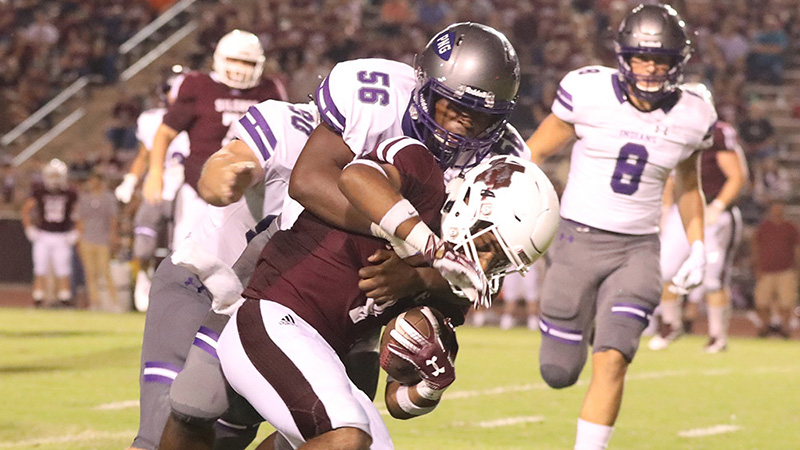 SILSBEE — The Port Neches-Groves Indians’ 2019-20 season started off on a high note after a 48-35 victory against the Silsbee Tigers on Friday. 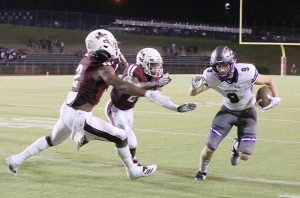 While many of the PNG collective wondered how University of Texas’ Roschon Johnson would be replaced, the first touchdown of the game ushered in PNG’s Blake Bost era after his 11-yard rush.

“Blake played well, and hardly made any mistakes,” PNG head coach Brandon Faircloth said. “He got the ball to our playmakers, and I’m proud of him for managing the offense the way he did.”

Silsbee’s Diego Carreon Gonzalez answered with a touchdown of his own in the first quarter, but the Indians would respond every time in the first half before running away with the game.

The Indians regained the lead with 5 minutes remaining in the first at 14-7 until a facemask penalty would culminate in a successful long pass followed by a 1-yard rushing touchdown by the Tigers.

At the end of the first quarter, the game remained tied at 14, which would leave a back-and-forth battle between both teams until more than halfway through the second quarter.

The Tigers answered everything the Indians put down through two quarters until a relentless Indians’ squad scored a passing touchdown followed by Tate Sandell’s fourth successful extra point with 15.5 seconds remaining before halftime.

“During that first half of the game, all I was thinking was ‘Man, the Silsbee Tigers are really good,’” Faircloth said. “We knew this was going to be a physical football game, and we’re fortunate for some of those turnovers in the second half of the game.”

Despite an early touchdown by the Tigers in the third quarter, the second half of the game belonged to the Indians after cleaning up penalties and forcing crucial turnovers, one of which led to the game winning, 30-yard rushing touchdown by RB Dejaunte Conner.

The Tigers would score only one touchdown in the final minute of the game, but could not come back after a dominant second half by the Indians.

“We played a cleaner game in the second half, and our defense pushed through and kept the game going in some of the tougher moments of the game,” Faircloth said.

The Indians have not lost to the Tigers in 25 years. This is Faircloth’s sixth victory over the Tigers.

The Indians are set to face the Huntsville Hornets on Sept. 6 at Sam Houston State University.

By April Marble, Special to The News