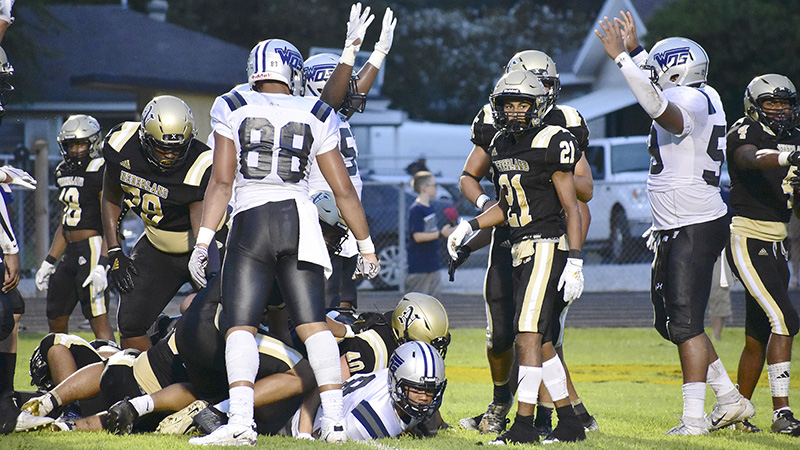 NEDERLAND — The Nederland Bulldogs fell one point short of victory against the West Orange-Stark Mustangs in a 21-20 nailbiter at Bulldog Stadium on Friday. 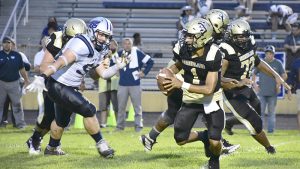 Nederland quarterback Bryce McMorris scrambles out of the pocket as Steven Wilkerson of West Orange-Stark pressures during the first quarter Friday in Nederland. McMorris completed a pass on the play. (I.C. Murrell/The News) 8-30-19

West-Orange Stark started the game out on top, scoring minutes into the first quarter. Junior quarterback Jerren Terrell hit a long shot up the home side of the field to put the Mustangs in scoring territory before taking it the remaining 2 yards for the touchdown.

WOS extended its lead to 14-0 for the remainder of the first quarter with a 17-yard pass from Terrell to senior tight end Shemar Manaway. The Bulldogs, determined to score before the end of the half, forced two turnovers. The second, a recovered fumble, gave Nederland the edge it needed with Josh Mazyck scoring on a 41-yard rush to cut the Mustangs’ lead in half, 14-7.

The Bulldogs capitalized on another WOS fumble, scooping up the ball at the Mustangs’ own 10-yard line with 8 minutes to go in the third quarter. Mazyck carried the ball 5 yards before starting quarterback Bryce McMorris hit junior Kade Scott for the remaining yardage. The Bulldogs went for the two-point conversion, but fell just shy of the end zone. 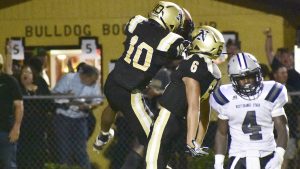 A little more than 4 minutes later, the Bulldogs came back with a fury. Mazyck ran for 32 yards, and Scott took it the short distance to give Nederland its first lead of the game, 20-14.

However, the lead was short lived when West Orange-Stark went back ahead in the fourth quarter. Elijah Gales brought a 16-yard carry into the end zone to restore the Mustangs’ lead at 21-20, giving the Bulldogs less than 7 minutes to score. Nederland attempted to make its way down the field but was held back by a holding penalty and several incomplete passes.

Nederland will head to Timberwolves territory to take on Beaumont United at Beaumont ISD Stadium on Thursday at 7:30 p.m.