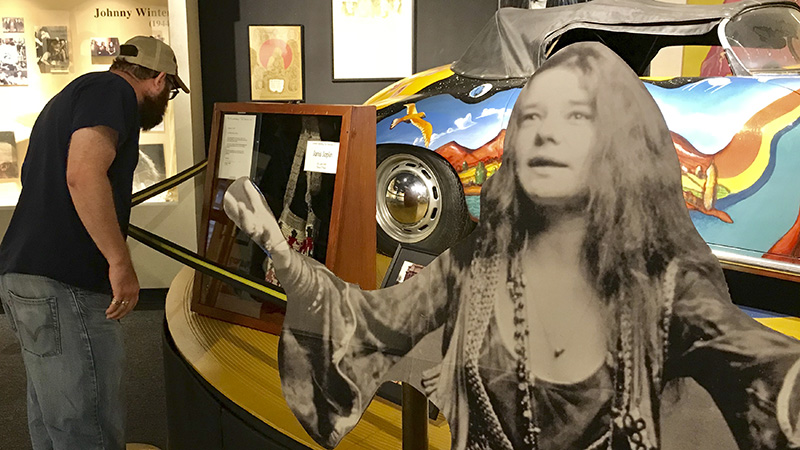 David Tyrrell Steinberg, 39, was a boy when he moved to Texas in 1991 and he can’t remember exactly how it was that he became drawn to one of this state’s most legendary singers.

It might have been around his early teens when he heard Janis Joplin’s 1971, posthumous version of “Cry Baby,” a blues and rock cover of a 1963 R&B chart topper by the Enchanters. He was enchanted.

Or it might have been the first time he heard her “Me and Bobbie McGee” from the same album, “Pearl.” That’s his favorite Joplin song. Kris Kristofferson wrote it but Joplin owned from the moment she sang it.

He said he doubts he’s Joplin’s biggest fan. But if there’s another one out there, he said, he hasn’t met him. 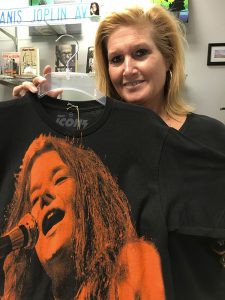 Steinberg, who’s lived in Houston most of his life, makes frequent treks east on Interstate 10 from his home to the Museum of the Gulf Coast in Port Arthur. It’s the museum most dedicated to Joplin, he said, and it carries the most merchandise and material related to a singer he whose music he just can’t revel in enough. He should know: He’s bought a lot of it.

On Friday, Steinberg was teasing Becky Guidry, who runs the museum gift shop, about the Janis Joplin Avenue sign that hangs over the merchandise. He wanted it, he insisted, but she stuck to her guns: It wasn’t for sale, only for display.

Nonetheless, Guidry says Steinberg is among the museum’s most faithful Joplin devotees. He’s been traveling to the museum for about six years, buying books and bricks and T-shirts, touring the Joplin exhibit in the music gallery on the museum’s second floor.

Much of it he keeps stored in his “man cave,” which includes Joplin records and 8-track recordings and a wine bottle bearing her image. There are pins and posters on all four walls. He owns a yearbook from her high school, Port Arthur’s Thomas Jefferson High. And much more. 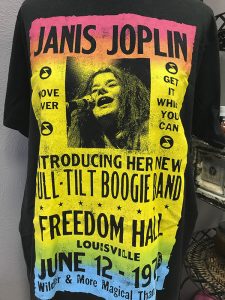 How much of a fan is he? Well, he used her license plate number, “Van 990,” on his own Texas vanity plate. That was her plate number on her Porsche, he said, though few people would know that.

He readily accepts being called “that crazy Janis fan.” Asked what’s the craziest Joplin relic he ever bought he responds quickly, “It’s all normal to me.”

He did collect some dirt from the lawn of her Procter Street home. That, he said, was a little different.

He owns about six Joplin T-shirts — the museum keeps a full stock of T-shirts on display — and biographies. There’s a new one due out and he’s ready to buy it.

On Friday, Steinberg took quick joy when he spied a Joplin cut-out positioned in front of the exhibit. Was there one for sale? He wanted to know.

There was a wool crochet handbag, too, on display. It was once owned and worn by Joplin. She gave the handbag to Mickey Deans, Judy Garland’s fifth and final husband and a Manhattan nightclub owner. Joplin gave him the bag to display in his nightclub. That was new, Steinberg said. 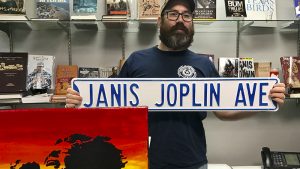 Guidry said Joplin remains the museum’s top draw. Their interstate billboards bear her image and so do their print ads.

People come from around the globe to see the Joplin exhibit; some cry when they see it, she said. She’s met visitors from Germany and Spain and Mexico. Two weeks ago, she shipped a memorial brick from the former Joplin home on Procter Street to the Netherlands.

Last year, a couple from Australia visited and wanted “one of everything” related to Joplin that was sold in the gift shop. The bill ran into the high hundreds of dollars.

In fact, he set up his own exhibit from his collection at the museum for Joplin’s 75th birthday, celebrated last year. As much as he’s collected, he lost memorabilia, too, during an April 2016 flood in Houston.

He said his wife Jennifer is a “good sport” about his Joplin interest, and “puts up with her.” They’ve been a couple for a decade, so it was no surprise when they married in April 2018 in Tomball that her husband hired a Joplin impersonator to entertain or that they danced to a wedding song “To Love Somebody” by Joplin.

But she’s not the fan that her husband is.

“She stands it,” Steinberg says. “She doesn’t encourage me to come here and buy it.”

Steinberg also shops for Joplin memorabilia and merchandise on ebay and in antique or book stores.

As expansive as his collection may be, he said he’s got room for more. He’ll collect as long as he lives, he said, and likely donate it to Port Arthur’s museum when he dies.

He’s never made the pilgrimage — well, not yet — to Cleveland’s Rock & Roll Hall of Fame but it’s on his bucket list. He’s interested in what they might have about Joplin but he remains convinced that no one does Janis Joplin better than Port Arthur’s museum.