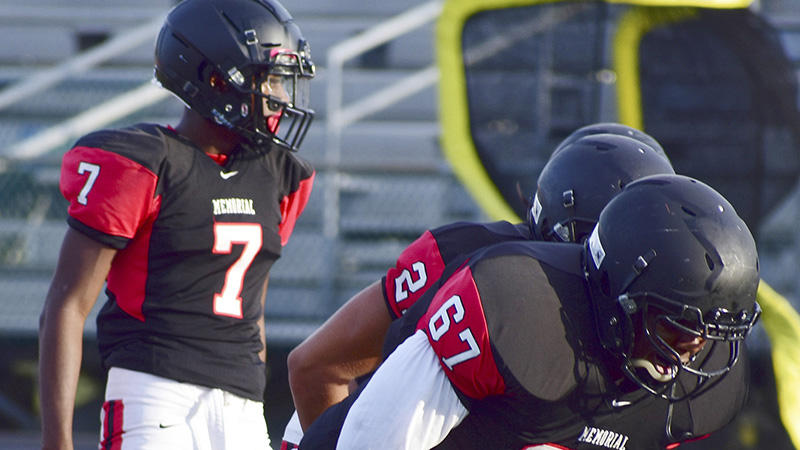 Port Arthur was treated to two Memorial home games to start the 2018 season. The outcome was the same — victory.

As Memorial takes on Deer Park tonight and Houston Madison next Friday, the Titans have already found a common challenge — the road.

“I guess it is, to some extent,” said Brian Morgan, beginning his second season as the Titans’ head coach. “We had two home games to start last year, so that’s part of it. This week, not being too bad of a drive. Next week, definitely being a little further drive, for sure. The only concern on the road games is, what kind of traffic and what time.”

Port Arthur’s Memorial Stadium won’t host the Titans until the third week of the season, when Beaumont United makes the short trip. That’ll be the Titans’ only home game until Oct. 3, when Goose Creek Memorial visits.

Tonight, Morgan has plenty to look forward to in Deer Park, a day ahead of his 36th birthday.

He’ll finally unveil his starting quarterback, either senior Brian Milton or sophomore Jah’mar Sanders, for one. They both made plays during last week’s home scrimmage against Nederland, making their coach feel comfortable with that position.

“This year, we’ve got two guys who’ve really set themselves apart for the rest of the guys in the room and are both ready to play,” Morgan said. “I think they’ll be solid guys going forward.”

Sanders said the wide-eyed feeling he got last Thursday is behind him. He and Milton have been competing against and helping each other at the same time all offseason.

“Last year, we didn’t really have a connection, but this year, during spring ball, we’ve been getting a little closer,” Sanders said.

In the backfield is the return of junior Branden Chaney from injury. He and classmate Tyrence Augusta have the potential to turn in 1,000-yard seasons.

Defensively, the sack machine known as Memorial’s front line is back and experienced. The secondary has playmakers to watch, including senior Jatavian Neal and sophomore Jaylon Guilbeau, but it’ll be revealed who’s filling holes left by key seniors from the 2018 team there and at linebacker.

Deer Park, 4-6 and 3-4 in District 21-6A last season, is seeking redemption in coach Austin Flynn’s second season after missing the playoffs for just the second time since 2006, according to Dave Campbell’s Texas Football. The Titans expect to have their hands full with 5-foot-7, 155-pound senior Marcus Molina, who plays multiple positions and returned three kicks for touchdowns last year, according to the magazine.

“We had a chance to see them running around and do some good things,” Morgan said. “Coach Flynn has them playing well. That’s what you’re going to get. They’re going to play hard. They’re going to be talented. … Defensively, they run to the ball well. They’ll strike you. They’re definitely a solid opponent.”

The Titans are wearing a red-circle decal with the letters KK in honor of late cornerbacks coach Kary Vincent Sr.

Vincent, who coached in last year’s Deer Park game, was hit with pneumonia while traveling to Arlington the next day to see his son Kary Jr. play in the Miami-LSU game. Vincent died Dec. 26 at age 49.

“@Aggie_db19 always in the hearts of Titan Nation!” Morgan tweeted, using Vincent Sr.’s Twitter handle, with a video of the decal.