Indians finding where to improve as season kicks off against Silsbee 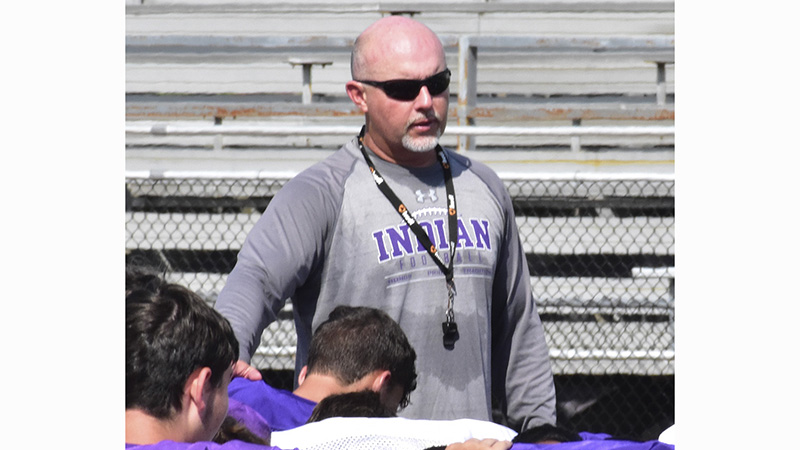 PORT NECHES — Now that the regular season has arrived, Port Neches-Groves coach Brandon Faircloth is bringing a much bigger script to the sideline against Silsbee.

“You only take 15 plays into a scrimmage, and during a game, you take in 50,” he said. “… You want to be unsuccessful at times because you want to work on stuff.”

The past two weeks, Faircloth just wanted to find out from West Orange-Stark and West Brook what to work on in preparation for one of WOS’ District 10-4A Division II rivals, the one team that ended the Mustangs’ 2018 season in the Region III title game.

“We’ve had a great week of practice, and we better because Silsbee is a great team,” Faircloth said. “Coach [Randy] Smith and his staff do a great job. They’ve got a great team and a lot of tradition over there. We’re excited about the game. It’s a wonderful opportunity. They’re going to show us where we need to get better, and that’s what we want. We want to learn where to get better.”

The Indians, 5A Division II Region III semifinalists the past three seasons, will begin the season without a big-time University of Texas recruit in senior right tackle Jaylen Garth. The test against Silsbee’s defense, which includes senior lineman Sam Roundtree and senior linebacker Dillon Tarver, could get a little more challenging up front.

That’s already the case against PNG’s defense, which is tasked to slow down a senior trio of running backs, Dralyn Taylor, Antonius Arline and Chris Martin.

PNG, for its part, is stacked with plenty of playmakers, the most experienced of whom are lining up as receivers. That bodes well for junior Blake Bost, who’ll make his first varsity start at quarterback tonight.

Some of the skill players, though not new to the varsity, will see more time on offense, like senior Zane Hernandez and junior running backs Lance Vaughn and Dejaunte Conner.

Hernandez is ready to see what the Indians have learned from playing championship-caliber teams in the preseason.

“Obviously, we like to stack our scrimmages up with great teams,” he said. “We’ve got the winningest team in Texas football. [West Orange-Stark is first all-time in win percentage at .801, minimum 500 games.] Having those teams come up and play us gives us really good practice against teams that play tough, play strong and play physical. Teams like that prepare us for the season.”