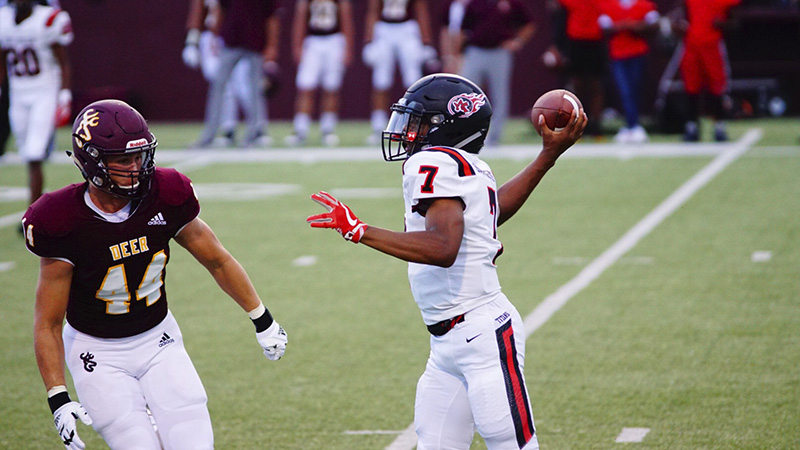 Memorial quarterback Jah’mar Sanders winds up for a pass against Deer Park on Friday in Deer Park. (Major Ponds/Special to The News) 8-30-19 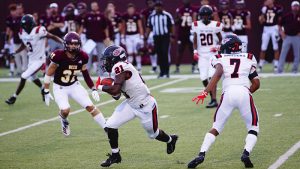 Branden Chaney (21) of Memorial takes a handoff from Jah’mar Sanders during Friday’s game against host Deer Park. (Major Ponds/Special to The News) 8-30-19

Taking over on downs at the Titan 35-yard line late in the fourth period, the Deer and Bellow answered the call with a 27-yard reception to the Memorial 8. One play later, Dylan Madden dashed eight yards for a touchdown with 3:11 left in the game.

The Titans tried hard in the final 3 minutes, but a pair of Jah’mar Sanders aerials fell incomplete. Then on fourth-and-8 from its own 38, Sanders was dropped for a 4-yard loss and Deer Park took over on downs to run the clock out.

After the Titans had taken a 20-19 led, Deer Park answered with a short, game-winning two-play, 35-yard touchdown march to seal the victory. Bellow, who didn’t catch a pass in the opening half, torched Memorial’s secondary in the second half finishing with six receptions for 138 yards. 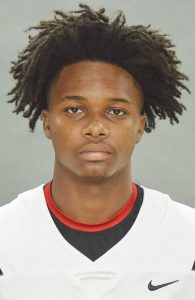 Sophomore quarterback Sanders’ 59-yard touchdown strike to wide receiver Alex Ned with just 0:01 remaining in the third stanza and Bryan Galvan’s successful PAT had given the Titans a 20-19 lead entering the final period.

Morgan’s club had taken a 13-12 lead in the first half driving 69 yards in a time-consuming 4:28, 15-play drive culminating on a Chan Rubin 9-yard touchdown reception from Sanders in back of the Deer end zone.

Trailing 13-12 with just 63 seconds remaining before halftime, quarterback Potts drove his team 43 yards in just four plays to the Deer a 19-13 halftime margin.

After an incompletion on first down at the 43, the Deer Park signal caller connected on three consecutive pass completions to Bellow of 18, four and 21 yards. His final strike to Bellow of 21 yards brought the home crowd alive as the Deer senior wide receiver made a sensational catch in the far back of the Titan end zone for the touchdown. Alex Sanchez’ kick made it a 19-13 Deer Park lead with just 0:28 left before halftime.

Memorial sophomore Sanders had brought the Titan crowd to its feet on the sixth play of the contest sprinting 68 yards around the left side for the game’s initial score with 10:39 of the first making it a 6-0 lead. The PAT failed.

After the Titans’ Adrian Hayward intercepted a Potts pass at the Deer 27, Memorial turned it right back over to the hosts as Sanders was picked off on the very next play.

Deer Park junior Dylan Madden’s three-yard touchdown run at the 8:03 mark of the opening period provided the Deer a 6-6 tie after yet another extra point kick failed.

In the first half, Deer Park had 14 first downs to the Titans’ 8. Although Memorial had 195 yards total offense in the opening two periods, the Deer used the passing of senior Mathew Potts (10-of-21-132 yards and a score. The Deer also rolled up 83 yards on the ground.

Memorial, buoyed by Sanders’ early long-distance dash to paydirt, finished the first half with 138 yards rushing and 57 passing (195 total offense)

In the second half, Bellow caught six passes for 138 yards propelling the Deer to a come-from-behind win.

Deer Park junior quarterback Potts, who completed 15-of-31 passes for 231 yards and one touchdown and also to Bellow.

On Sept. 6, the Titans will travel to Houston for a 7 p.m. contest against Class 5A Houston Madison. Madison is coached by Port Arthur Lincoln great Shawn Narcisse. The game will be played at Butler Stadium.