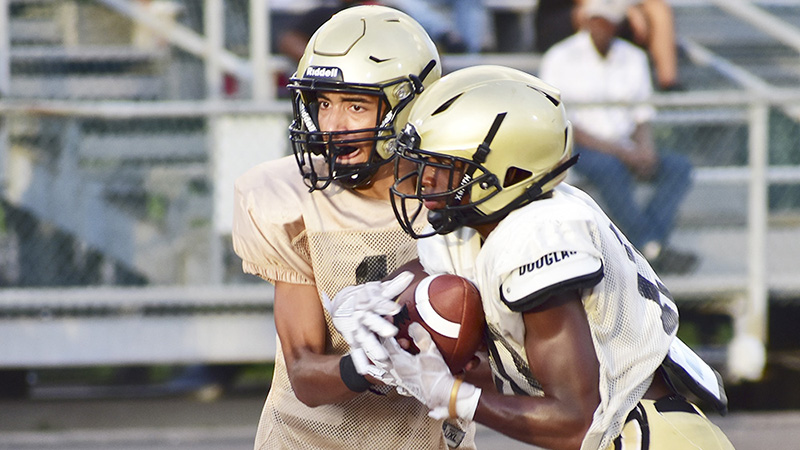 Bryce McMorris of Nederland hands off to running back Josh Mazyck during last Thursday’s scrimmage at Memorial. (I.C. Murrell/The News) 8-22-19

When taking on a team with a championship pedigree, difference in classification hardly matters.

“West Orange [Stark] is just a program that’s at the top, year in and year out, known statewide,” Barrow said. “They can only make us better for the rest of the season.”

Beating West Orange-Stark can also give Nederland, 10-2 and District 12-5A Division II co-champion last season, quite the jumpstart to a season. A season after the Mustangs’ last of four straight 4A Division II state championship appearances, the Bulldogs pulled off a 19-18 win in an unexpected debut for Bryce McMorris as starting quarterback and went on to win nine straight.

“And, I know how West Orange’s mindset is when you beat them the season before,” Barrow said. “That doesn’t go well over there, nor should it anywhere.”

Just two years earlier, host West Orange-Stark dropped a 42-0 hammer on Nederland, kicking off its second straight championship season. Tropical Storm Harvey in 2017 forced the cancelation of what would have been Barrow’s debut as head coach against the Mustangs.

“It goes in cycles, and you see, first off, what kind of team were they last year,” Barrow said. “Were they young? Were they senior heavy? Same with us. Fortunately for us, Bryce McMorris was the quarterback in that game. The experience he got with us, he’ll take into this game.”

Ninth-year Mustangs coach Cornel Thompson told The Orange Leader the offensive and defensive lines were the team’s strengths, but added he was worried about inexperience with the receivers and secondary.

Seniors Quincy Ledet and Shemar Manaway and junior Courtney Davis can go both ways on the line, with Manaway expected to haul in some passes as a tight end from junior Jerren Terrell.

Barrow had a more favorable scouting report on the WOS defense.

“Looking on their side of the ball, with guys they probably had less experience with last year, they’re coming back more experienced, especially defensively, where they’re looking bigger, faster, stronger,” he said.

The Mustangs’ physicality, along with their pedigree, is mainly why the Bulldogs respect them. Their proximity to Nederland, along with talent, is what Barrow looks for in designing his early-season slate, although Nederland is returning the favor to WOS as the host team Friday.

“We’re going to schedule as many opponents as we can, but not travel as much since our district has a lot of travel,” said Barrow, whose Bulldogs will visit Beaumont United on Sept. 5 and host Silsbee Sept. 13. “That makes a big difference with West Orange, Beaumont and Silsbee, not having to go the other side of Houston as much in non-district as we will in district.”

Playing at home takes on more meaning to Nederland right tackle Jadon Windon as a senior.

“Everybody coming out, seeing the whole city stand. It’s a whole different experience, since this is my last year,” he said. “Gotta enjoy it. You never know when it’s your last one.”