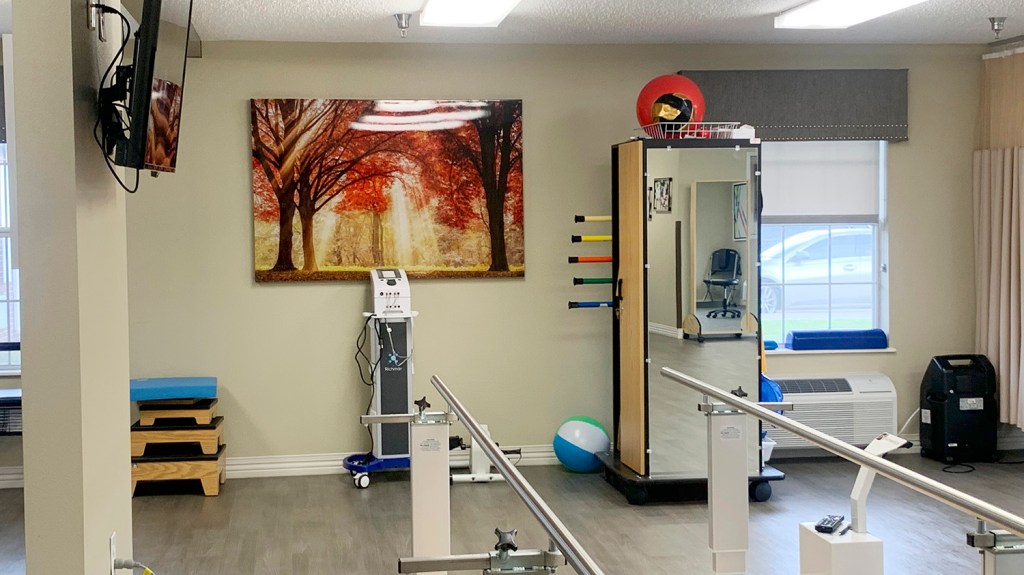 Gulf Healthcare Center is newly renovated and reopened two years after being flooded by Hurricane Harvey. The four-star nursing home in Port Arthur received an upgrade to its occupational therapy gym, which is equipped with technology and exercises. (Cassandra Jenkins/The News) 8-28-19

Hurricane Harvey hit the Gulf Coast full force, causing unforeseeable flooding and storm damage to homes and businesses in its wake. Port Arthur was one of many towns devastated and while some of the community has returned to normal, others here are just beginning to get back on their feet.

The nationally recognized Port Arthur nursing home, Gulf Healthcare Center, was one of those businesses finally able to celebrate a grand re-opening this week. 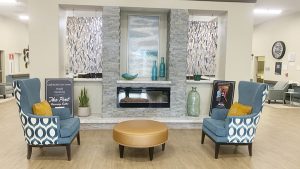 Gulf Healthcare Center is newly renovated and reopened two years after being flooded by Hurricane Harvey. The open reception area was newly designed to look more like a hotel lobby than a nursing home. (Cassandra Jenkins/The News) 8-28-19

CEO Ron Payne of Southwest LTC, the company that operates the nursing home, said he remembers the day Hurricane Harvey hit the nursing home and the way his staff responded.

At the time, Payne said the decision was made to enact a shelter in place once the floodwaters started rising and they contacted the Federal Emergency Management Agency.

“We did flag down FEMA and they determined we were not critical and did not need to evacuate at that time,” he said. “The water continued to rise and the decision was finally made to evacuate. We did enlist the services of the ‘Cajun Navy’ and other volunteers in the area.”

Payne said an individual, Nick Hebert, the Vice President of Operations with Southwest LTC, was a driving force behind maintaining a safe and quick evacuation.

“(Hebert) was in the Gulf Coast region when (hurricanes) Rita and Ike hit, so he knew what to do,” he said. “He was the driving force behind keeping the boats organized and not allowing a chaotic scene to occur. We were able to take residents two at a time to the boats and take them to our sister facility Senior Rehab, also in Port Arthur.”

Payne said the building was destroyed and rebuilding has been difficult.

“We were in litigation with our insurance company trying to dispute whether the damage was from the main storm or the flood,” he said. “Obviously, in our opinion, the flood was a result of the storm and we should have coverage. We’ve been in litigation with them for a couple years now and were able to work with one of our senior lenders and use some equity from another building to get a secondary loan that allowed us to cover the cost of the reconstruction.”

With the buildings reopening, Payne said it is a better facility than it used to be with upgrades to the therapy gym equipment and all new interior design.

“We gutted the building completely and the interior is all brand new — new flooring and furniture,” he said.

Payne said the services mostly remain the same, but there is a bigger, better gym for rehabbing people with strokes, hip and knee replacements. Rooms were also designed with more comfort in mind.

Carrie Jeanis, Healthcare Center administrator, said she is thrilled to continue serving Port Arthur, a feat not all businesses in the area were able to overcome.

“We were just one of three nursing homes that had flood damage and had to evacuate,” she said. “For ours to come back, that says a lot to the community that we are invested to having these services for the community that are definitely needed.”

“There have been difficulties in differentiating us from the facilities that are not reopening,” he said. “We evacuated our building without any repercussions or lawsuits. We were able to do it all in an organized manner that was safe for all our residents.”

As the only four-star nursing home building in Port Arthur, Payne said he is ready to continue great service to the community.

“We are proud to bring this level of care to the Port Arthur community and they deserve the highest quality care. We’ve owned and operated that facility until 2004 and we feel like we are a part of this community. We are proud of the staff and residents and will always do what it takes to make sure they are taken care of and get the best they can.”