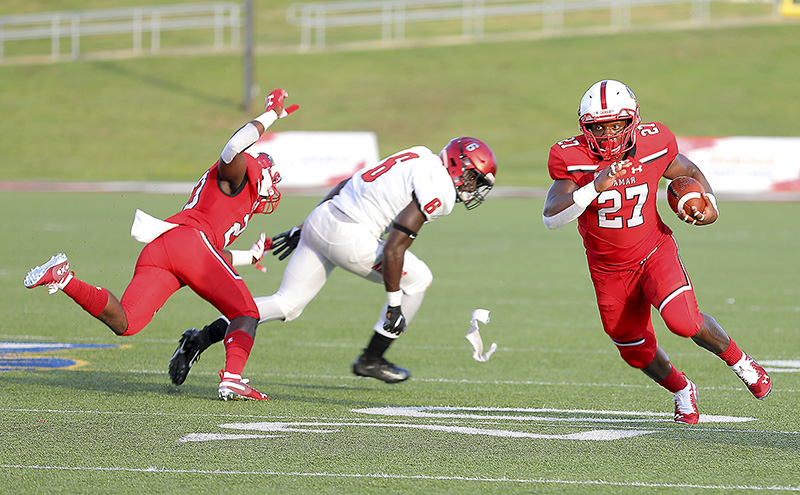 Whether that includes thunderstorms remains to be seen. The National Weather Service’s forecast for tonight calls for a chance of showers and thunderstorms in the afternoon with partly cloudy skies in the evening.

But, unlike in recent preseason camps, Lamar coach Mike Schultz hasn’t seen too much bad weather interrupt his practices.

“It seemed like there were some afternoon showers and we had morning workouts, and there were some morning showers when we had afternoon workouts,” he said. “The rain doesn’t bother you. We’ll work through rain, but when you get called off for lightning, and you have to sit back for 30 minutes, that becomes pretty tedious. We were very fortunate we had to move one practice. We ended up taking it inside to our gyms and working through what was left of the practice.”

Lamar has gotten its usual share of humidity, and Schultz won’t apologize if it plays to the Cardinals’ advantage against McKenzie, Tennessee-based Bethel University tonight.

Lamar last played on a Thursday night on Oct. 3, 2016, losing 35-10 at Nicholls State as part of a five-game losing streak that capped Ray Woodard’s last season as head coach. The streak ran to six following the 2017 season-opening loss at North Texas.

While Schultz kicks off his third season in Beaumont, tonight marks the debut of Michael Jasper as Bethel’s head coach.

Jasper served as assistant head coach and worked with the defensive line last season, helping Bethel go 10-1 and earn an NAIA playoff berth. Jasper, who graduated from Bethel, played three years in the NFL with the Buffalo Bills, New York Giants and the Carolina Panthers.

NO UNKNOWNS AT QUARTERBACK

For the second year in a row, Schultz has an experienced quarterback in place to start.

That would be senior Jordan Hoy, who shared starts with Darrel Colbert Jr. last year.

Where Schultz has faced the most uncertainty is in the secondary. All of the starters from Lamar’s most recent game against Northern Iowa in last year’s NCAA Division I playoffs have either left the team or completed eligibility.

“We’ve been working and trying to shore that up,” Schultz said. “Andrew Mullinax is a returner that has got himself penciled in as a starter right now. Early on, we’ll do some rotations. Tariq Anthony has a chance to work into the rotation.”

Mullinax, a junior, is listed as nickel back, with classmate Anthony slated to play cornerback. Sophomore Steven Jones is expected to start at the other corner, with juniors Michael Lawson and Nakota Shepard-Creer at the safeties.

Schultz’s tone while talking about Bethel was one of respect for a team representing a school of about 4,500 students.

The Wildcats are ranked No. 16 in the NAIA’s preseason coaches’ poll. They went 5-0 in the Mid-South Conference’s Bluegrass division last season and averaged 540.3 yards and 55 points per game (both No. 1 in NAIA) while allowing 345.3 per game.

Bethel will display a Spread Gun offense while lining up in a 4-2-5 defense.

“They very seldom aren’t lined up in the right position,” Schultz said. “They’re going to make you earn everything you get.”

J’Kobi Reddick is a first-team All-American specialist, who ranked No. 1 in the NAIA in punt return yards at 20.9 yards per attempt. Reddick returned four for touchdowns.

“They probably have one of the most dynamic punt returners in the country,” Schultz said. “He scored a bunch last year. He’s a very explosive young man who does a great job.”

This is the first meeting between Lamar and Bethel.

Lamar has announced a tailgating area called Cardinal Lane that includes more than 20 corporate partners, a concert series and kid’s zone. Each concert, starting with Adrian Michael tonight, will begin 2 hours before kickoff.

Fans at Cardinal Lane will get to greet the football team during the Cardinal Walk.