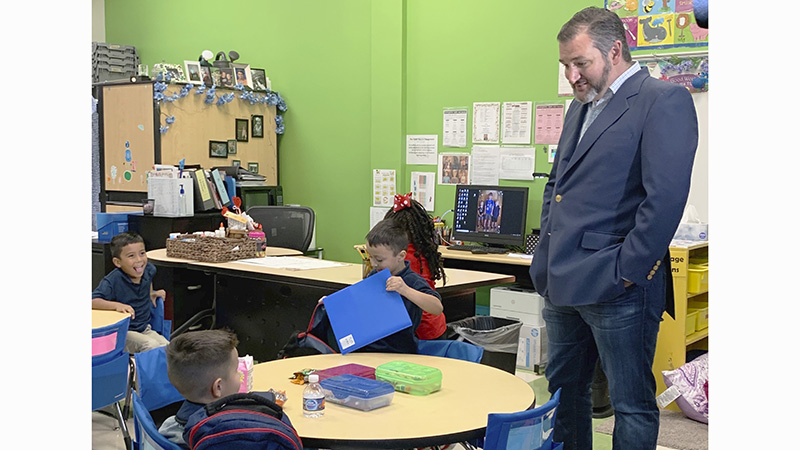 With the two-year anniversary of Hurricane Harvey around the corner, many residents in the Port Arthur community are remembering the times their homes, schools and businesses were destroyed and flooded. For PAISD, it was a trying time and now they are celebrating the rehabilitation and advancements of several campuses. 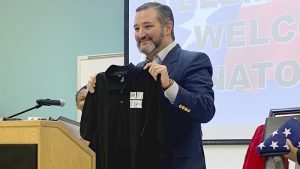 “I had the chance today to visit Adams Elementary School in Port Arthur once again,” Cruz said. “I was here right after Hurricane Harvey. I saw a school that was flooded — it was virtually the entire school. They had to rip up the sheetrock, start over and spend a year rebuilding this school. It’s exciting to see a brand new school. They have brand new computers, a new library, etc. and I can see the joy and life in the kids.”

Cruz spoke a few words to waiting fifth-graders, teachers, staff and parents. His main message: Anything is possible.

“One of the things I shared with the kids was the story of my dad,” he said. “Because when my dad came from Cuba to Texas he had nothing. He couldn’t speak English and had $100 in his underwear. It’s important for a kid, particularly for a kid whose family may have lost everything in the storm, to understand that even if times are tough it doesn’t mean that there isn’t anything they can’t accomplish.” 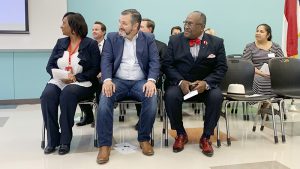 Cruz stopped in a couple of classrooms to spread words of encouragement and optimism to the students.

“Two years ago when Hurricane Harvey hit Texas, it hit hard,” he said. “There was no community that was hit as hard as Port Arthur was, and yet this community came together with a spirit of love and a spirit of compassion.”

During Cruz’s speech at the assembly he asked the audience not how many of them were impacted by the storm but how many in the room helped someone else at the time.

“Just about every hand, even from the little kids, went up,” he said. “That’s Texas and that’s who we are. That’s the spirit we’re celebrating. I’m proud to be here celebrating this school that is making a difference in the lives of their kids.” 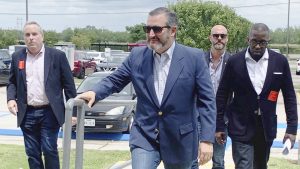 U.S. Sen. Ted Cruz visited Adams Elementary for the two-year anniversary of Hurricane Harvey on Wednesday. Cruz, who saw the school when it was under water after the storm, returned to see its progress and renovation. (Cassandra Jenkins/The News) 8-28-19

Cruz stopped in several Southeast Texas cities in 2017, but what he said he remembers most isn’t the wreckage but the aftermath and helping hand of the community.

“I remember being here at the school,” he said. “I remembering being at the church down the road and helping give out food, diapers, clothing and medicine. Over and over again, I remember I’d go to a young mom with a couple of babies in the car and try to hand her two packs of diapers. I’d hand it to her and she’d say, ‘I’ll just take one. There are other people who need things more than I do.’ That was the spirit of Port Arthur, of Texas.”

Although towns from Corpus Christi to the Louisiana border have recovered, many remain in the process of rebuilding, moving and starting over. Cruz said he intends to continue the fight to help those people.

Cruz said along with U.S. Sen. John Cornyn, R-Texas, and U.S. Sen. Marco Rubio, R-Florida, he was able to pass what is called the Cruz-Cornyn-Rubio Tax Relief Bill.

“(The bill) provided over $5 billion in tax relief to the families that were impacted by Harvey,” he said. “We have seen a lot of funds, a lot of resources come to the state of Texas but there are still a lot of funds in the pipeline.

“One of the things I keep pressing is that sometimes the federal government doesn’t move as fast as it should, so Congress has appropriated the money but it’s still taking time to make it through the federal agencies. I’m continuing to press to speed up that relief.”