The Sabine Pass Sharks are back, but it hasn’t hit ninth-year head coach Jason Thibodeaux yet.

“No, it won’t happen until the lights come on and we’ll realize that we’re back,” he said. 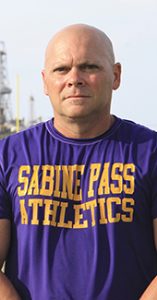 By that time, it will have been nearly a full year since since the Sharks last played a football game, and the idea of such a long wait will become a distant memory, if only seemingly.

If Sabine Pass has found any signs that 2019 could turn into a season like no other, the Sharks can point to two things. First, all 22 players reported to preseason camp on the first day, something that hasn’t happened in years and a bright spot for a team that last won a game Oct. 13, 2017 (at home vs. Burkeville). Secondly, the Sharks opted out of playing a difficult District 12-2A Division II schedule in their return. They’re playing a combination of private- and public-school programs about equal in talent to help develop their own team, which includes five freshmen, four sophomores, eight juniors and five seniors.

“The numbers are what I’m more excited about,” Thibodeaux said. “We’re so much far advanced from where we were two years ago. I think the kids are tired of beating up on each other. They’re ready to beat up on someone else.”

Pasadena First Baptist Christian Academy, which beat Sabine Pass in the previous two meetings, has fallen on hard times of its own. The Warriors, who also play an independent schedule, lost their remaining seven games following last year’s win.

“Last year, we had four touchdowns called back, so we had the game well in hand,” Thibodeaux said. “Penalties come in territory with the game. We have to clean up our mistakes.”

First Baptist escaped with a 19-14 victory. The Warriors won at Sabine Pass 12-6 in the 2016 season opener after a long weather delay. Tropical Storm Harvey washed away their 2017 meeting.

Asked for a scouting report on the Warriors, Thibodeaux didn’t have any visual evidence to go on.

“I didn’t get any film on them this year,” he said. “They scrimmaged and we didn’t. I talked to the coach. This is what offense and defense we played. I guess we’re both going into it blind.”

The Sharks folded their season following a 50-0 loss at Hull-Daisetta last Sept. 14, finishing that game with only 12 healthy players. Upon hearing their season was over early, the Houston Texans, via video invitation from receiver DeAndre Hopkins, invited the Sharks’ seniors to their facilities during a home-game weekend.

“I was driving down the road, and a former player stopped me and asked me how’s the team doing,” Thibodeaux said. “Our homes here are elevated, and usually people watch from the porches. We have a couple of houses at our end zone. He’s an old player. If he wants to be on the sideline, I’ll let him be on the sideline to experience the thrill of Sabine Pass football.”