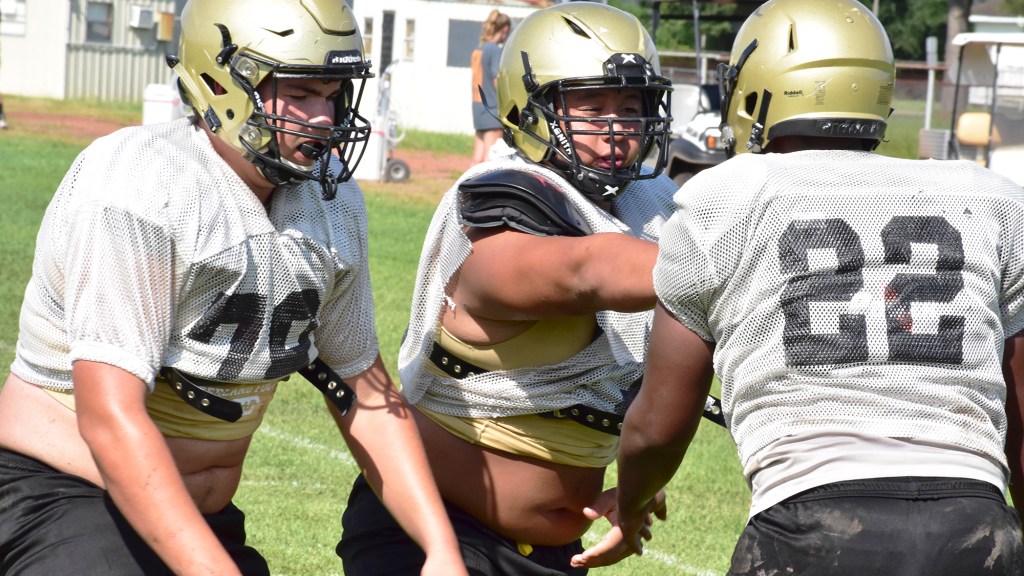 NEDERLAND — To prepare for a program that’s been to four state championship games in five years, it’s good to play a neighbor in a slightly higher division and another team that’s won state the past two years.

Such has been the preseason at Nederland as it gears for West Orange-Stark.

Third-year head coach Monte Barrow wanted to see how well Nederland could handle the level of physicality West Orange-Stark — which went to 4A Division II title games each year from 2014-17 (winning in 2015 and 2016) will bring to Bulldog Stadium, especially on the offensive line. Two-time 3A Division II champion Newton, which took part in a three-way scrimmage with Lumberton, and 5A Division I neighbor Memorial gave the Bulldogs all the hard hits they could handle.

“Those were my first comments afterward [Thursday’s scrimmage at Memorial], how physical it was, but in a good way,” Barrow said. “It wasn’t a dirty physical; it was a clean physical on both sides. Both sides were playing kind of like what we like to be known for, which is physical.”

For Nederland’s senior-oriented offensive line, the challenge is continuing to jell as the season kicks off.

“We’re still working on that,” said Jae Stoker, who coaches the offensive line along with David Crommett. “We may have four seniors, but only two of them have started on varsity. Logan [Anderson at center] was a backup last year. Jadon [Windon at right guard] has seen a few reps. [Left guard Merritt] Styles was a JV player last year. Those two guys, we’re still waiting for them to get to the same level as Jonathan [Nguyen at left tackle] and Jadon. They started for the last two years, whereas these guys are just trying to catch up to the speed of the game and the knowledge aspect and the technique.”

“Mike was a sophomore last year, and he’s going to grow into that position,” Barrow said. “We told him, we’re not going to be patient with him, but we understand the strides that it takes to play the offensive line and the different things he��ll see, the different types of individuals he’ll go against. He’s got a good one who’s been there a few years in Jadon Windon and you got Jonathan Nguyen on the other side, who’s been a staple for us.”

Stoker was pleased with how the offensive line weathered Memorial’s sack machine otherwise known as the defensive line last Thursday, but he believes his front five has not yet reached their potential. Barrow said his o-line made strides from one scrimmage to the other.

“It’s just preparing us on what we’re going to be going through the whole year, a strong d-line giving us more experience because it’s a new o-line coming back with two starters and three new people on the o-line,” Nguyen said.

Windon is counting on cohesion away from the field to help the Bulldogs on their home soil against the Mustangs, who lost 19-18 to Nederland last year but overcame that to go unbeaten in District 10-4A Division II and reach the Region III final against district rival Silsbee — the Bulldogs’ Week 3 foe.

“Most of us are a group of friends,” Windon said. “We have a really good connection. We’ll help with homework so we get good grades and stuff. We have a good chemistry.”

They also have what Stoker calls the biggest offensive line he’s worked with in 14 years at Nederland. The average weight among the starting five is 270 pounds, he said, with 230-pound Anderson being the smallest.

“The work they put in through the offseason through the summer, how they show up every day and go about their business,” Barrow explained. “This is one of those games where your offensive line has to bring their lunch pail to work and say, ‘Let’s go,’ so we’re counting on those guys.”