Good problem to have: Titans happy with quarterback battle 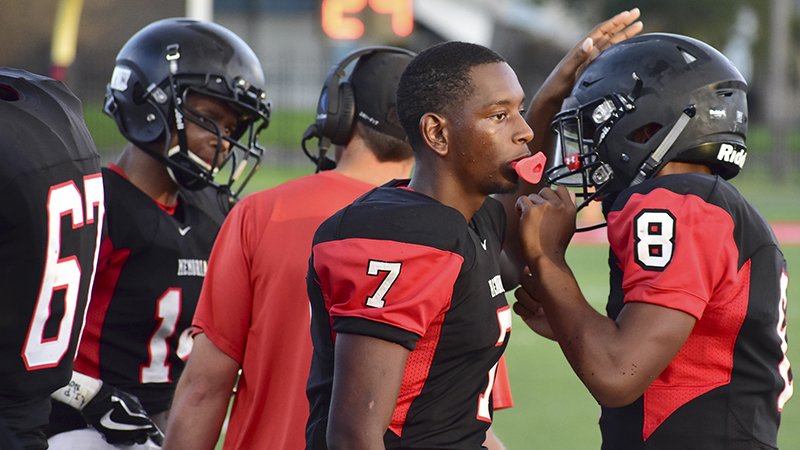 Brian Milton (7) of Memorial pats Jah’mar Sanders (8) on the helmet after an offensive series during Thursday’s scrimmage against Nederland in Port Arthur. (I.C. Murrell/The News) 8-22-19

Second-year Memorial head coach Brian Morgan has been in no rush to select a starting quarterback for Friday’s season opener at Deer Park. 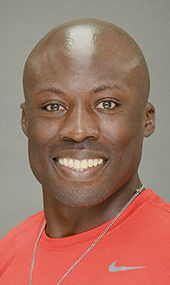 He’s happy he can choose from two young men who turned in good performances in Thursday’s home scrimmage against Nederland.

“I felt both of them operated the offense well,” Morgan said about senior Brian Milton and sophomore Jah’mar Sanders. “Both of them kind of did a bunch of different things more than you would in a regular-week game plan.”

Sanders threw a touchdown pass to Alex Ned and Milton had success leading the offense down the field in a 17-14 win. Even when one gets the starting nod, both could see some valuable time Friday night.

And both share plenty of information in practice, according to Sanders.

“Having two guys who know the offense and can control the offense and know all the calls, able to line the guys up, that’s a plus to have two guys that can do it,” offensive coordinator Rashard Colquitt said. “Whichever quarterback coach Morgan chooses to start, we feel comfortable they’ll be able to get the job done.”

Morgan, who along with assistant Ahmad Smith works with the quarterbacks, doesn’t feel as “hamstrung” at the position as he did last year, with only then-senior Kam Ladia having considerable experience behind center. Ladia threw for 1,543 yards and 16 touchdowns a year ago.

“We gave them a bunch of different things and motions and just some different stuff to see if they could handle it,” Morgan said of his current signal-callers. “Both of them did that. That was good to see. Both of them handled the situation; you just didn’t know [how they would] with somebody else, but they both operated well. Both of them took at least one shot and got up. They got the respect of their teammates doing that. I think that was really good to see on that end.”

Sanders credited Colquitt with helping him on signals and play calling. The scrimmage was the sophomore’s golden opportunity to work off any nervousness of live action on the varsity level.

“At first, it was kind of uncomfortable seeing different people, knowing they do different stuff than us,” Sanders said. “So, I was kind of nervous, but after playing and getting comfortable, I knew we had the game.”

A new game is on the horizon at Deer Park. The Deer went 4-6 and 3-4 in District 21-6A (which includes West Brook and Beaumont United), starting the season with a 48-20 loss in Port Arthur last year.

Colquitt, going into his first game as coordinator, will have his eyes on more than just a healthy quarterback situation. For one, he’s hoping his offensive line continues to jell and will have a solid game protecting either Milton or Sanders.

“I really think our o-line played together [Thursday],” Colquitt said. “That’s the first time that group of guys played together. I thought they did a tremendous job playing a great defensive team in Nederland. Their d-linemen were good. The linebackers are really good. I thought the guys went out there and executed really well.”

Then, there’s the running game, always a strong point in Port Arthur.

“[Branden] Chaney ran the ball well. Kason [Williams] ran the ball well,” Colquitt commented. “Our quarterbacks really took control of the offense. They made some plays down the field with Ned and the young quarterback [Sanders]. Chan [Rubin] caught some big passes. I think the offense executed our base stuff. Our guys feel comfortable doing that.”