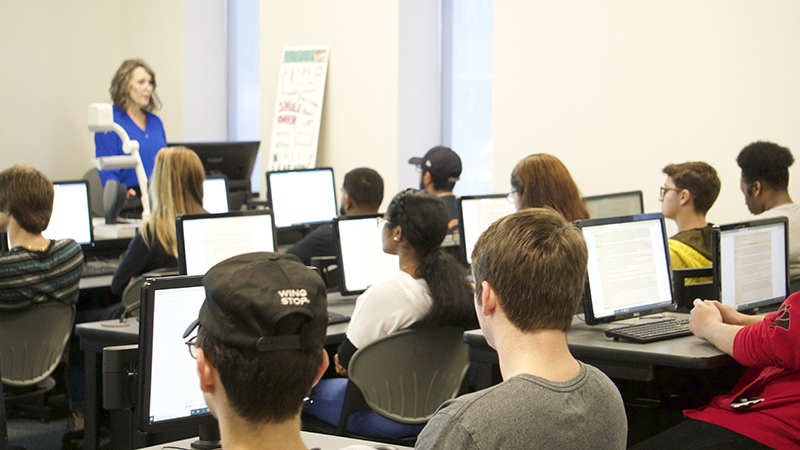 The first day of college isn’t like the first day of kindergarten, or even high school. Gone are the sparkling notebooks, the three-ring binders and multiple writing utensils. In their places are single spiral notebooks and black pens.

Although students aren’t handed a lollipop or golden sticker in every class anymore, professors still care about the future of their students.

The students, staff and administration at Lamar State College Port Arthur all echoed the same statement Monday — the first day back to school — college is about preparing for your future. 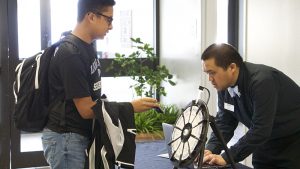 Lamar State College Port Arthur students participated in a spin the wheel game Monday in the student center where they could win swag items such as water bottles, bracelets, phone chargers and more on their first day back to school. (Cassandra Jenkins/The News)

For Shanell Taylor, LSCPA is an opportunity for change. The first-year student is a native of Jamaica and recent transfer from the University of St. Thomas in Houston.

“(LSCPA) is closer to home,” Taylor said. “I was really stressed out at (St. Thomas), so I decided to transfer here. This year is one of my most challenging years. I switched my major from accounting to business administration. I’m looking forward to the future of going into business. I’m not quite sure where it might take me, but I’m looking forward to that and Lamar Port Arthur can give me that opportunity.”

Taylor, a graduate of Tekoa Academy, said even though she just started classes, she already likes her professors and is excited for what the new school year will bring her. 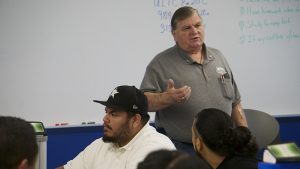 “I’m glad to be back,” she said. “I have my favorite teacher for both classes, so I’m extra excited about that. I just got out of art history and I’m going into the drawing class, which I am really happy about because I am an art major.”

The Beaumont native commutes each morning, but Murray said the schooling is well worth the drive as she prepares for the new semester.

Jessica De Luna, a Port Arthur native, is finally getting to participate in practical training.

“With the paralegal program I have been dealing with a lot of hypotheticals, so now is actually the year I get to dive into stuff and do the hands-on work,” she said. “It’s going to help me decide if I really want to do this or not.” 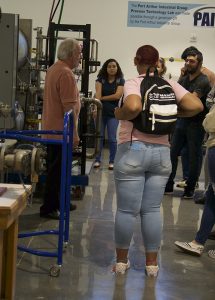 De Luna said although most of her Monday classes were just going over the syllabus, she feels good about her schedule and is ready to hit the ground running.

Grace Megnet, a professor at LSCPA for art appreciation and design, said she is most excited about her students and seeing what the new school year brings.

“This year I am introducing sketchbooks to all my classes,” she said. “Instead of having a notebook for art history and art appreciation, they will use a sketchbook. They will take notes like normal, but then I will expect some little drawings and pictures that they draw or cut out.” 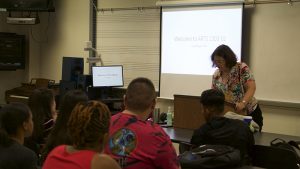 “I had this wonderful encounter last week,” she said. “I was in Dallas at a gallery and I came around the corner and there was this professionally dressed woman who was my student maybe six or eight years ago. She told me she was there because of me — that her classes opened her eyes with what could happen with the arts.

“She’s not an artist, but she’s working for a bank that purchases art because it’s a good investment. So, I’m teaching my new students what employers expect from college grads — critical thinking, communication and professionalism. We practice that everyday.”

In mid July, the Lamar State Colleges, including the Port Arthur campus, received a 25 percent cut in tuition via the Texas State University System Board of Regents approving a $17.3 million budget for reductions.

Students across the campus expressed their gratitude Monday as they started school.

Taylor said she found out about the cuts the day she registered for classes.

“I think it is really good because compared to what I was paying for at St. Thomas, it is more in budget for me,” she said. “It helped my decision to return to Port Arthur and go to school at LSCPA.” 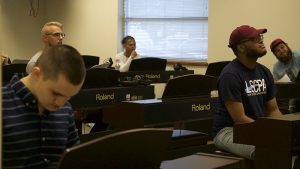 Murray, whose parents help fund her tuition, said the drop lightens the pressure on her and her family.

De Luna, who splits paying her tuition with her parents, is extremely grateful for the price reduction.

“The (cut) helped a lot,” she said. “It takes the burden off both you, as a student, and your parents. That’s a lot to think about with jobs and school, so it does help to have a little decrease.”