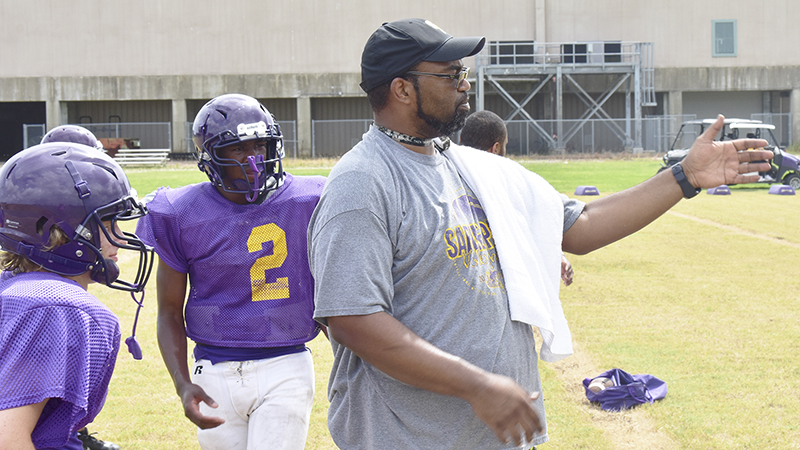 SABINE PASS — Many high school football coaches get to take their first look at their future athletes when they’re in middle school.

“We won the elementary championship in basketball in the two years we had him over there,” Deblanc said. “He lost his dad going into the eighth grade, ninth grade, so I’ve been kind of trying to keep him on the right path.”

Through a high school career of playing guard in basketball and running the 4×100- and 4×200-meter relays as well as the 200 meters, James hasn’t strayed.

The way Deblanc, a 1998 Stephen F. Austin High School graduate better known as “Coach Will,” and James, now a senior wide receiver and defensive back at Sabine Pass, communicate could pass for older brother talking to little brother. Deblanc delivers instructions to wide receivers and defensive backs during a drill, and James responds in a casual way only a coach closely connected to an athlete can absorb.

The playing surface is a refuge for James, but last season was short-lived when injuries dwindled the Sharks’ roster down to 12 players through two games, the last being a 50-0 loss to Hull-Daisetta. That forced school officials to cancel the remaining games.

James was injured during the first game, a 19-14 loss to Pasadena First Baptist Christian Academy, and missed the Hull-Daisetta contest.

In the past two seasons, the Sharks have played only eight games. Four games on the Sharks’ 2017 schedule were canceled due to Tropical Storm Harvey, and they went 1-5.

While the news may be old and repetitive, it’s a source of motivation for James.

“It just pushes us to get better and do better things for stuff like next year,” he said. “If it happens again, we’ll be prepared for it. Mentally and physically, be ready for it.”

Next year is now. The Sharks are not short on players this time, and James is one of the leaders.

“The thing was, he wanted to make sure the program made a name for it his senior year,” Deblanc said. “He didn’t want the program to go out like it did last year without having any games. It was kind of bad.

“This year, he came to me and he said, ‘Coach, I want to make a difference.’ We’re going to see what happens with it. He’s coming out here and putting full effort in. The kids look up to him, and we expect him to be a leader. It’s his senior year, so we’re going to make something happen.”

Deblanc is ready for the journey with James.

He came to Sabine Pass just before Harvey’s arrival hoping to help the Sharks build on the success of 2016’s run to the playoffs.

“When I came here, it feels almost the same as Stephen F. Austin, with it being a small school,” Deblanc said. “It’s not leaving PA, but I did, you know, to come and try to turn the program around and try to make a name for itself. You have a couple of Sabiners, but most of the guys are from PA. I know their parents and I take care of them while they’re out here.”

With Deblanc, James finds himself in good hands.