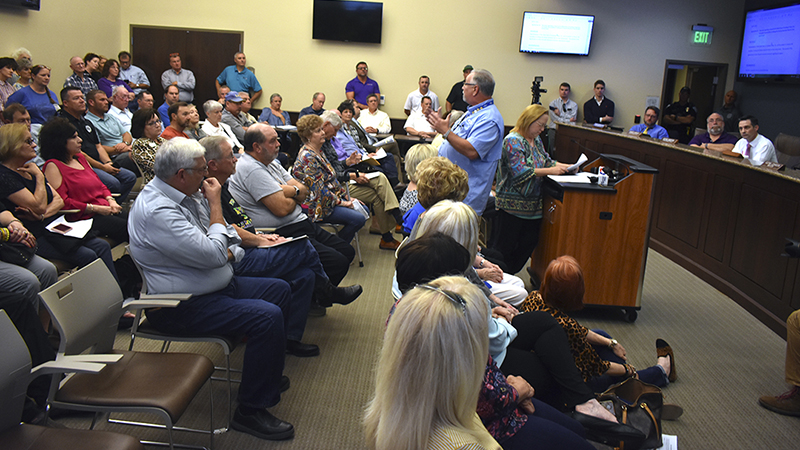 Tim Romero, president of the MGSETX board, addressed the Port Neches City Council and more than 150 of its residents who packed council chambers and the hallway for talks about possibly using Port Neches Riverfront Park as a venue for the Mardi Gras celebration. (Mary Meaux/The News)

The fate of Mardi Gras of Southeast Texas Inc. is now in the hands of the Beaumont City Council.

The dates are already set — Feb. 20-23, 2020, but the venue won’t be officially decided until Beaumont councilmembers vote during the 1:30 p.m. meeting on Tuesday.

Laura Childress, president of MGSET, said nothing is for certain at this point, adding she appreciated everything Beaumont has done for the organization.

She said should the event move to Beaumont much would stay the same.

Port Arthur Mayor Thurman Bartie summed his thoughts up easily — “I hate to see them go,” he said.

Bartie took office in June after he defeated the previous mayor Derrick Freeman in a run-off. But turmoil was already swirling with talks of MGSET considering a move more than a year ago. Dwindling crowds and vendors setting up shop outside the gate taking away from inside-the-gates vendors are some of the main issues leading to the change.

Mardi Gras officials earlier this year took their request to the city of Port Neches, where a majority of the citizens who spoke during a meeting were against the festival coming to their city.

Mardi Gras of Southeast Texas concluded its 27th year in the city of Port Arthur in March.