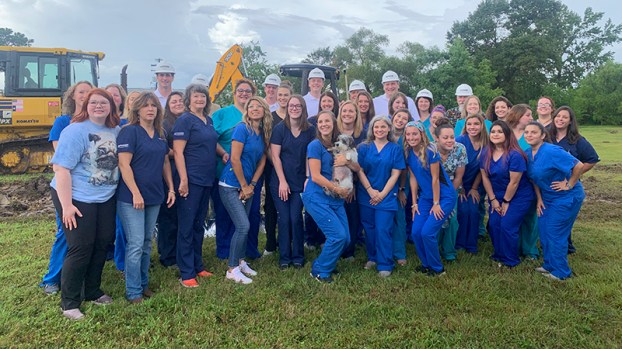 Nederland is about to get some attention, furry attention that is.

The Neighborhood Veterinary Centers broke ground on a new state-of-the-art surgical facility and vet clinic that will be the only one of its kind in Southeast Texas, officials say.

Brady Hanson, director of veterinary medicine at Wilcox Veterinary Clinic in Groves, is spearheading the new building, which officially began its construction on Friday.

Hanson said the building will reflect the quality of service that will be provided, including orthopedic and neurosurgeries only available in SETX at the Wilcox Vet.

“We do a lot of orthopedic surgeries like knees, hips and bones,” he said. “We do back surgeries on dogs with slipped discs. Sometimes we will have a broken back and we will fix those. There are not many surgeries that we don’t do. We’re able to do almost everything. 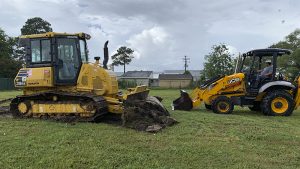 Neighborhood Veterinary Center held a groundbreaking ceremony Friday for the kickoff of their new surgical facility. The new building will serve as the organization’s headquarters. (Cassandra Jenkins/The News)

“The only other place you can get that service is in Houston or at Texas A&M, and they are a lot more expensive. I am not board certified. The difference is when you go to one of those clinics they have a board certified technician doing the services. It makes it a lot more expensive. We are trying to provide advanced surgeries at a cost that more people can afford.”

The building, located at 3606 FM 365 in Nederland behind Starbucks, will have new state-of-the-art equipment and a unique airflow to reduce chances of distributing contagions.

“We’re going to have more advanced imaging and we’re going to have a facility that is designed based more on human medicine like the referral centers in Houston,” Hanson said. “It’s also going to be more sterile. There’s a lot of thought that’s gone into the airflow.

The plan calls for airflow going into the surgery facility to be sterilized. There will be only one flow of air, so none of it is recycled. This is one way to reduce infection and the spread of disease.

Hanson said once finished he believes the facility will be something the community can be proud of.

“I think Southeast Texas will be known for having a facility that people can come to from all over to have their animals treated,” he said. “We already have a lot of great veterinarians in the area. I don’t think there’s an area where people care about their pets more and they deserve to have something like this.”

Alongside the local community, Hanson said the new building will attract more patients from out of town. 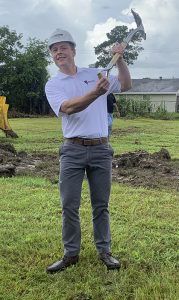 Brady Hanson, director of veterinary medicine at Wilcox Veterinary Clinic in Groves, spearheaded the design and planning of the new building. Hanson was the first to put a shovel in the dirt at the new site location. (Cassandra Jenkins/The News)

The building, which took almost a year and 10 months to design and plan, will be complete, tentatively, in nine months and in addition to the surgical facility and vet clinic, Hanson said the project will include a small dog park and boarding house.

“This means a lot to my staff, as well as the community,” he said. “They work really hard and we have too many people in a small building. This will give us all space, and we are doing certain things in this clinic to improve their quality of work life, make it more enjoyable.”

Madison Andis, a veterinary technician at Wilcox, said she has been waiting for a longtime to see the first steps of the construction.

“I am very excited,” she said. “Our clinic is just so old and dated. It’s going to be nice to have something brand new. All the special things that it’s going to have with the rehab, more space for everyone, more surgical space — I’m really excited.

For more information on some of the services to be provide, visit wilcoxveterinaryclinic.com.

Braden Bailey shot five strokes better than his third-round pace, and the Groves resident turned in a 67 Friday to... read more