At Thomas Jefferson Middle School, success is every child learning 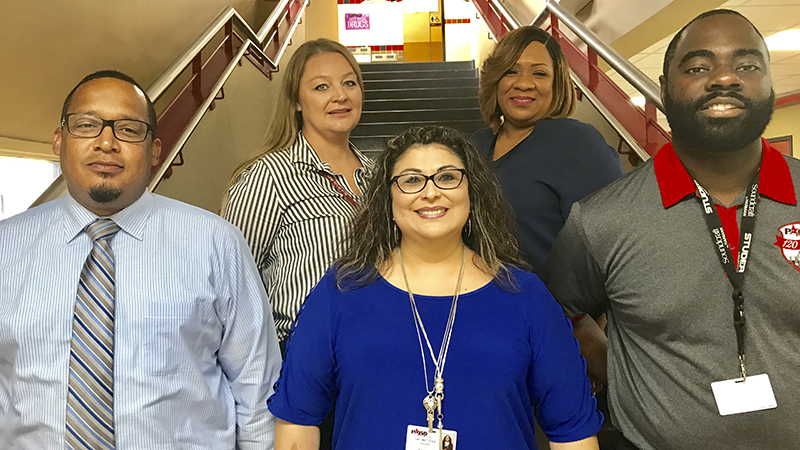 Port Arthur ISD’s sole point of failure in recently released, statewide accountability ratings is already a month into a sea change, with a largely new administrative team in place and a vow to adhere to a turnaround.

Oliva has in place a veteran administrative team of Carl McDaniel, Naomi Knowlton, Noelle Green-Anderson and Kendal Lee. Only Lee is returning to TJ from last year.

Oliva said this week that what’s holding back the school is a recent failure to “close gaps” between students with command of the English language and students who need to bolster their language skills.

That’s not an easy task, but Oliva said the new administration has experience in turning schools around.

“It’s not anything new to us,” she said, adding it’s doable.

One area of focus for the new team is more than 400 of the 1,072 students at TJ are “English learners” — students who don’t speak English as their primary language or need instruction or remediation to become fully proficient in English. In general, those students speak either Spanish or Vietnamese.

An English learner, Oliva said, is “basically a student who has not yet mastered English language with fluency.”

“Our goal is to meet the needs of the English learner, whatever those might be,” she said. “Some may not have had any formal education.”

Oliva said there was a plan for educating such students last year but the plan will be revised this year for continuous improvement. Stops along the way — for example, six-week grade reports — will tell the new administration if the revised and evolving plan is succeeding.

“A lot of those students are coming from different countries,” Porterie said Monday. “At PAISD, we have to address their needs. We have to be creative and meet the students where they are.

“If a student comes here and has never been to school, you can’t expect them to know everything,” he said. “They may be old enough for middle school, so you can’t enroll them in second grade even if that would be an appropriate knowledge level.”

That gives some context to the school’s challenges, he said, and to why TJ recorded a failing grade. The state of Texas says despite language deficiencies, those children must be tested alongside their English-proficient classmates.

As a public school system, Porterie says, PAISD, unlike public and private schools, cannot deny any child access to an education. He said the school system’s job is to put out a product, “an educated student,” to which the system is committed.

“We cannot and would not exclude any child,” he said.

Those English learners come from a host of countries, Oliva said: Venezuela, Honduras, Guatemala, the Dominican Republic. Or they might be American citizens but Spanish speakers, such as in Puerto Rico.

“The framework for teaching students has everything to do with making content comprehensible,” she said.

That involves “lesson delivery” and how the teachers shape lessons to build an academic vocabulary for students, how the teacher helps students engage and interact in class. It integrates reading and writing in core course instruction.

That means teachers of English learners above beginner level use clear, direct and simple English as they teach English and reading, math, science and social studies.

Noelle Green-Anderson, sixth-grade assistant principal, said school faculty members are also offering a host of extra-curricular activities to enhance student life. These include chess, journalism, cooking, Titans for Christ and student council — all of which might encourage student involvement.

Porterie said PAISD has plans eventually to transform the former Stephen F. Austin School into a newcomers’ center, a place where parents and students from other countries might become better acclimated to the community and capable of operating within it. He acknowledges how difficult it is to come from another country and straight into a classroom.

But, he said, “If you are a quality educator, you can teach all students” — those who are advanced right up to students who are 21 and have never been to school.

He said he thought Oliva was the best fit to lead Thomas Jefferson this year because of her background in English as a second language and because of her experience and record of success. The bar, he said, has been raised, but within reason.

Oliva said success would be marked this year by rating improvements, student progress and equity among all groups of learners.

Success, Porterie said, would be “truly getting out of that ‘F’” and moving into “a well-rounded school year at Thomas Jefferson” in which “every child is learning and there is much progress.”