Not without a fight: Field goal puts Titans over Bulldogs in scrimmage 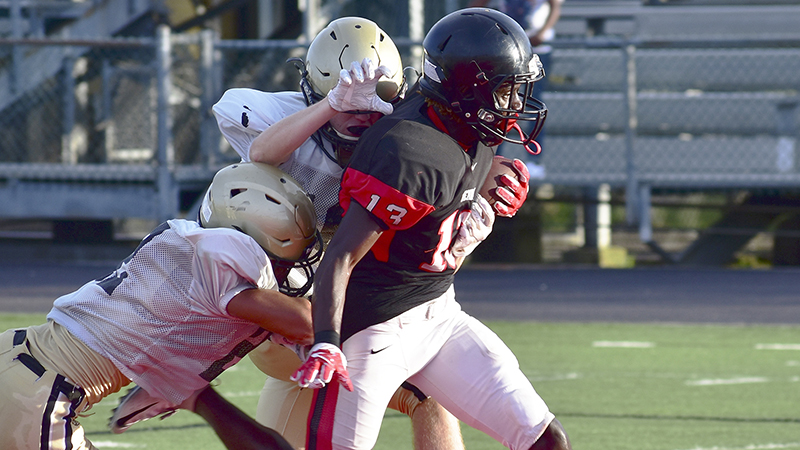 Tyrence Augusta of Memorial breaks a tackle by Nederland and rushes into the end zone in the first quarter Thursday in Port Arthur. (I.C. Murrell/The News) 8-22-19

The Nederland Bulldogs started out the night on top, but the Memorial Titans weren’t going down without a fight during a scrimmage Thursday night at Memorial Stadium. Memorial came away with a 17-14 win. 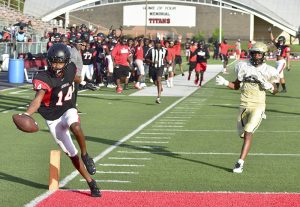 Alex Ned of Memorial stays inbounds and scores on a touchdown reception by Jah’mar Sanders (not pictured) in the first quarter against Nederland on Thursday in Port Arthur. (I.C. Murrell/The News) 8-22-19

“We ran the ball well, which we expected to,” Memorial head coach Brian Morgan said. “I think we are going to be good in the position and upfront. Once our defense settled down today, they played well against the run, and you have to do that to win football games.”

The Titans opted for a Brian Galvan field goal that placed them ahead, 17-14, with 4:35 left in the game. Nederland turned the ball over on downs on its next drive in its own territory.

Nederland junior Josh Mazyck rushed for a 50-yard touchdown on the third play of the game. The lead was short lived as the Titans brought the ball into the end zone 6 minutes later on a 30-yard rush by junior wide receiver Tyrence Augusta.

The Titans tacked on seven more points 3 minutes later, coming off the hands of sophomore quarterback Jah’mar Sanders to senior wide receiver Alex Ned. The Titans held onto a 14-7 lead at the end of the quarter

“We wanted to see what the quarterbacks could handle offensively, and I think they did a pretty good job of moving fast and operating well,” Morgan said. “They didn’t really make any mistakes at all.”

Memorial attempted to add six points to the scoreboard after an interception by junior defensive back Kevondre Mitchell at the 9:42 mark. A team effort put the Titans within scoring distance, but pass interference and holding calls sent them too far back to recover.

With only 2:25 left, the Bulldogs pushed their way to the Titans’ 25-yard line. A quick pass from quarterback Bryce McMorris to sophomore Kyndon Fuselier tied the score at 14.

Both teams stepped up defensively in the third quarter with neither getting the edge.

“Defensively, we had one or two seniors who graduated that were really good players for us,” Morgan said. “We had to replace those guys and we will get a chance to look at the notes and see who the best replacements are.”

In an attempt to recover the lead, Titans insider linebacker Adrian Hayward intercepted a pass that bounced off the hands of two Nederland receivers. The defensive tide turned seconds later when the Bulldogs recovered a quarterback fumble, but were unable to capitalize. Galvan scored on the next drive.

Nederland head coach Monte Barrow said he will use the loss and the scrimmage as a learning experience for the upcoming game against West Orange-Stark.

“It was what we had talked about beforehand,” he said. “It was very physical, which I told them at the end was the best thing that could have happened to us, because it’s not going to be any different next week. That physicality that happened out there tonight on both sides of the ball, and from both teams, was very well played. I think we can grow from that.”

Nederland will face West Orange-Stark at Bulldog Stadium in its home opener next Friday at 7:30 p.m. Memorial will hit the road for its first game against Deer Park next Friday at 7 p.m.