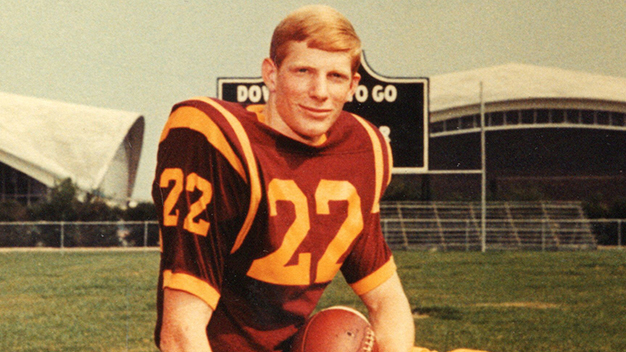 Cotton Speyrer, during his days at Thomas Jefferson High School, circa 1966. (Courtesy Museum of the Gulf Coast)

Charles “Cotton” Speyrer is the only player to be named to two Cotton Bowl All-Decade teams (1960s and 1970s). His diving catch in the January 1970 Cotton Bowl helped Texas knock off Joe Theismann-quarterbacked Notre Dame and secure a national championship.

"Keep your helmet on. They're gonna throw whiskey on you and it's still in the bottle," advice Cotton Speyrer received before the Game of the Century.

That wasn’t the most memorable game of the Longhorns’ season in his book. A game in Fayetteville, Arkansas, dubbed the ‘Game of the Century’ takes that cake.

“It definitely was because of all the hype,” said Speyrer, a Port Arthur native and Thomas Jefferson High School alumnus. “Roone Arledge, who was the executive director of ABC Sports at the time, asked to have it moved from its normal slot, which was the third game of the season. It was moved to the last week of the season because it was the only remaining game.”

Arledge, best known for producing Wide World of Sports and creating Monday Night Football, got his wish, and No. 1-ranked Texas came from 14-0 down to beat No. 2 Arkansas in front of President Richard Nixon on Dec. 6, 1969.

The Longhorns’ eventual season is documented in a 90-minute Longhorn Network special titled 1969, which will debut at 7 p.m. Friday.

In a 50-second promo for the documentary, Speyrer and other team members are shown describing the Longhorns’ ride to Fayetteville. Arkansas and Texas were rivals in the Southwest Conference through the 1991 season, after which Arkansas left for the Southeastern Conference (and reunited with another SWC foe, Texas A&M, in 2012).

“We’re told to keep our helmets on at all times,” Speyrer said in the promo. “It was kind of like, ‘What?’ [I was told,] ‘They’re going to throw whiskey on you and it’s still in the bottle.’ So, you know, [I thought,] ‘OK, good idea. Keep your helmets on.’”

In a Thursday interview with The News, Speyrer said he didn’t recall any bottles of whiskey flying toward him or the team.

“The fans were rowdy,” Speyrer said. “President Nixon was there and it was the 100th season of college football, and it was called the ‘Game of the Century’. I don’t blame them for being excited.”

Speyrer was named All-American twice and caught 65 passes for 1,093 yards and eight touchdowns at UT (1968-70) during a time when freshmen were not eligible to compete on the varsity team. Among his biggest plays at Texas were touchdowns of 78 and 79 yards against Tennessee in the January 1969 Cotton Bowl, which helped him earn a share of game MVP honors along with linebacker Tom Campbell and quarterback James Street.

Fullback Steve Worster, who led Bridge City to the 1966 3A state championship, was named MVP of the 1970 Cotton Bowl after rushing 20 times for 155 yards. Speyrer caught four passes for 70 yards and rushed once for 13 yards in that game.

One of those catches was a diving catch of an 8-yard pass to the Notre Dame 2. Billy Dale scored the winning touchdown on a 1-yard run three plays later with 1:08 remaining, securing a 21-17 win.

Speyrer earned the nickname Cotton because he had “real white” hair when he was born.

“I was called Charles when I went to Port Arthur Jefferson, and Darrell Royal [Texas’ head coach at the time] was the one who went back to calling me Cotton,” Speyrer said. “He heard my parents call me that.”

The Washington Redskins drafted Speyrer in the second round in 1971, but he was traded to the Baltimore Colts later that year, according to his bio in the Museum of the Gulf Coast. Injured that year with a broken arm, Speyrer spent three seasons with the Baltimore Colts (1972-74) and the next with the Miami Dolphins before retiring. One of his biggest plays was a 101-yard kickoff return against the Buffalo Bills in 1973.