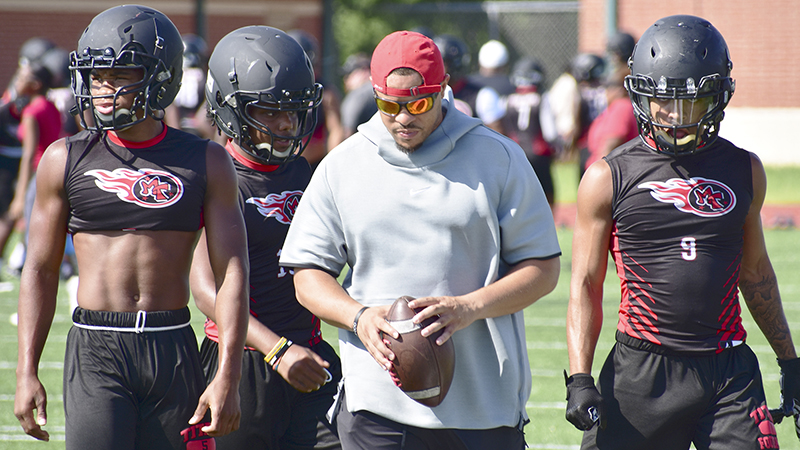 Memorial defensive coordinator Korey Mangum sets up a drill with some of his players during the first day of preseason camp Aug. 12. (I.C. Murrell/The News) 8-12-19

Jatavian Neal is ready to tackle a team of another color.

“I’m ready to put on for Port Arthur Memorial, for the city as one, ready to represent my family and get to my main goal, which is to play in college at the next level,” the senior defensive back said.

Tonight’s home scrimmage with Nederland (varsity to start at approximately 6:30) will be the only one for the Titans, who started preseason camp just 10 days ago, and the second for Nederland, which hosted a dual rehearsal with Newton and Lumberton last Friday. It’ll be the last time Memorial lines up against another team in Port Arthur until Sept. 13, when Beaumont United visits.

Six starters return on both sides of the ball at Memorial. Neal, who spent some time at running back in 2018, stood out more in the secondary with three interceptions.

Memorial’s defensive line made its own big impact with more than 40 sacks last season, which helped them set what second-year coordinator Korey Mangum calls “a high standard” that’s not measured by statistics.

“They’ve got players returning, with Jordon [Thomas, a junior], Keoni [Evans, a senior], who’s been playing in the system for two years,” Mangum said. “Donaven Jackson [a junior] played a lot, and even David Moore [a senior] coming over from tight end. He played some last year.

“They understand the standard just by winning and being tough. I don’t worry about 40 sacks, but I do know they set themselves a high standard.”

That standard has given the defensive line something to build on through the offseason.

“We’re just getting stronger,” Jackson said. “We’re getting faster, working on our techniques, getting smarter and making sure our defense has it all under control.”

The high standard served Memorial’s entire defense well in 2018. The Titans led District 9-5A Division I in fewest points allowed per game with 15 and in overall defense at 171.8 yards per game allowed.

Many newcomers have been working out at linebacker, and second-year head coach Brian Morgan is ready to see how they — and offensive newcomers, as well — perform against a former District 22-5A rival in Nederland.

“I think for some of the players who aren’t proven on Friday nights, it’ll be good to see how they react against a good program against a team that’s going to play really tough, physical, and we feel good about some of those guys and what we’ve seen,” Morgan said. “Just seeing that, seeing the quarterbacks operate the offense is exciting and I’m anxious to see how much they can handle. I put quite a bit on them to see how much they can handle, the volume of it, as opposed to a regular game plan.”

Senior Brian Milton, junior Tony Brooks and sophomore Jah’mar Sanders are expected to take snaps tonight. Whoever ends up on top of the depth chart will take over the offense Aug. 30 at Deer Park, replacing graduate Kam Ladia.

The offense has helped Mangum’s defense “a lot,” he said, by playing hard-nosed football.

“We’ve still got some things to improve on,” he said. “We’re looking pretty good. A lot of the young kids are coming together. We still have a lot of growth to do. We lost some players, but the way the kids are playing, they’re going to be getting there.”

Having seniors like Colton Mitchell and Neal in the secondary won’t hurt.

“It’s a great opportunity to be coached by coach Morgan and coach Mangum,” Neal said. “Me and my brothers, the football team, we go against each other every day to make each other better, so now it’s time to show everybody what we’ve been practicing through the summer and the two-a-days and the off-periods we’ve been having, so we’re just ready to excel and proceed in our season.”